A Wonderland of Knowledge Standing on the Land of Musashino 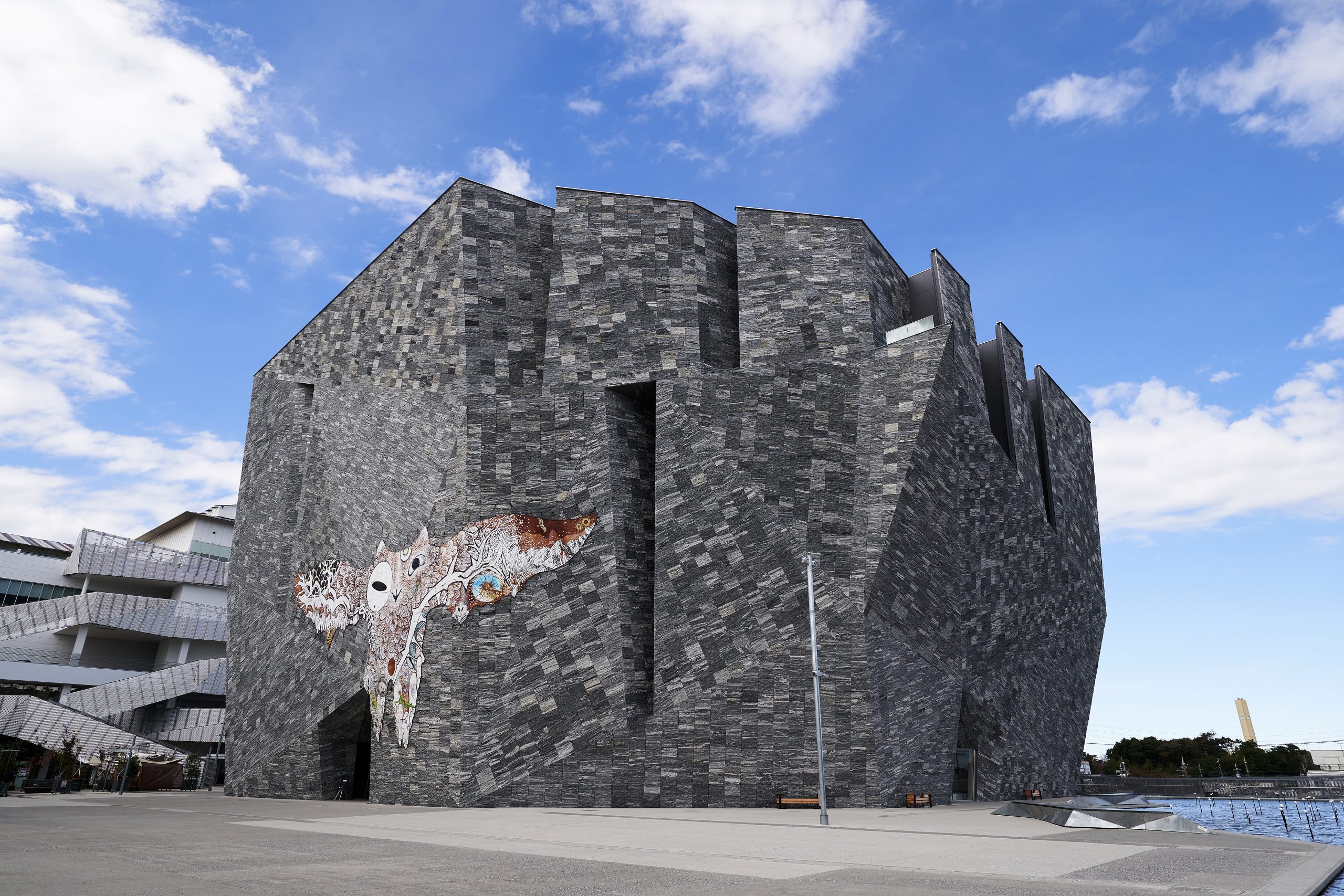 Kadokawa Culture Museum, a multi-cultural complex featuring art, natural history and books, opened in Tokorozawa City, Saitama Prefecture, in November 2020. It was built as a landmark of Tokorozawa Sakura Town, the base of the COOL JAPAN FOREST concept, a regional development project jointly promoted by Tokorozawa City and the KADOKAWA entertainment company, which set up a new office in the same area.

A 10-minute walk from JR Higashi Tokorozawa Station, through Higashi Tokorozawa Park, takes you to a huge stone structure that is the Kadokawa Culture Museum. The outer walls are covered with granite, designed to look like the Earth's crust erupting to the surface, as the Kanto Plain is covered with a loam layer formed by the accumulation of volcanic ash. The design was supervised by Kengo Kuma, one of Japan’s leading architects. Mr. Kuma was simultaneously working on the construction project of the New Japan National Stadium, which recently hosted the Tokyo 2020 Olympic and Paralympic Games, and the Kadokawa Culture Museum in 2018 and 2019.

Spreading its wings over the building’s wall is Tomoko Konoike’s Musashino Kawa Tonbi created under the “Amabie in the age of COVID-19”project’s volume 2.

In response to the spread of the novel coronavirus, the “Amabie in the age of COVID-19” is a project that aims to send messages to the future by having artists create images of “contemporary Amabie” that go beyond people’s imagination. Curated by Shingo Jinno, director of the complex’s art department, six artists presented their works in a relay format starting November 6, 2020. Some are displayed in the lobby on the second floor where the entrance to the building is located. (The display’s final date is yet to be decided.) Through the artists’ works, the viewer can feel energy that responds to the large space, overcomes anxiety, and creates the future.

On the first floor is the Grand Gallery, covering about 1,000 square meters, and the Manga and Light Novel Library, which reopened in July 2021.

In the Grand Gallery, visitors can enjoy a breathtaking display that covers science, art and natural history in a large space. The current exhibition, “Ukiyo-e Theater from Paris” (October 30, 2021–April 10, 2022), is a 360-degree, whole-body experience where visitors are enveloped in the world of Ukiyo-e, with images projected on the huge walls and floor.

The Manga and Light Novel Library has a collection of about 35,000 books, including light novels, comics and children’s books published by the company itself, as well as light novels from other companies donated by 18 companies at the time of the renewal. “People, both adults and children relax and enjoy staying in this place, especially in the Manga and Light Novel Library on the first floor,” said Mayumi Saito, who is in charge of public relations. She adds that it is common to see parents reading books to their children in the picture-book and digital picture-book corner.

On the third floor is the EJ Anime Museum, which introduces Japan’s world-class anime culture. In addition to exhibiting original drawings, storyboards and other materials from animation works, a special exhibition, “Isekai Museum” (other world museum), held from July 17 to September 26, 2021, re-created famous scenes with life-size standing statues and visual effects to convey the appeal of four KADOKAWA titles set in other worlds.

The current exhibition, “Marvel Studios: A Universe of Heroes" (running until January 2, 2022), also features a large number of statues and items of Marvel heroes, making it an event where visitors can immersive themselves, as if they were in the world portrayed in the movie.

On the fourth floor, in Edit Town, is the Edit & Art Gallery. It is a place to reconstruct one’s own knowledge by letting one’s imagination run wild from exhibitions, mainly of contemporary art. At the “Machi Tawara Exhibition # Only one ‘Like,’ from Salad Anniversary to the Size of the Future” (July 21, 2021–January 10, 2022), there is a corner where visitors are given the chance to compose tanka poems borrowing phrases from Salad Anniversary. Large numbers of visitors have taken part.

In addition to the three exhibition spaces, a wide range of art of different genres is featured in the lobby and on the building’s walls. Each piece has its unique characteristics.

Expanding interests from books to natural history and art

A path lined on both sides by books leads to the back of the floor, next to the Edit & Art Gallery. The path, called Book Street, contains about 25,000 books selected under the supervision of Seigo Matsuoka, the museum director. Visitors are free to pick up and read them. There are complete editions of novels, illustrated books, photo books, manga, etc. They are not divided by genre but by “nine contexts” for reading, such as “to the forest of memories” and “books difficult to read.”

Off to the side of Book Street is the ARAMATA Wunderkammer (Museum), supervised by Hiroshi Aramata, a writer, naturalist and yokai researcher. From stuffed animals and skeletal specimens to pieces of UFOs, there are many items on display that may arouse your curiosity. Many of the shelves are lined with pop-ups handwritten by Mr. Aramata.

At the far end is the Bookshelf Theater, which has become a popular location where the band YOASOBI sang in the 2020 NHK Kohaku Uta Gassen (an annual New Year’s Eve television program). An 8-meter-long wall houses KADOKAWA’s publications, a collection belonging to the founder of Kadokawa Shoten, Genyoshi Kadokawa, as well as those of authors and researchers who have been involved with the company since its founding, making it a corner brimming with KADOKAWA’s history.

According to Ms. Saito, the fourth floor is “a space where a library, museum and art museum are mixed together.” The area symbolizes the Kadokawa Culture Museum, and it piques one’s intellectual curiosity.

On the fifth floor is the Musashino Gallery, which explores Musashino from the perspective of folklore, and the Musashino Corridor, where 250 books on Musashino are on the shelves under the supervision of folklorist Norio Akasaka.

Genyoshi Kadokawa was taught by the folklorist Kunio Yanagida and conducted fieldwork in Musashino. The topographical map of Musashino placed in the center of the Musashino Gallery and photographs taken by Genyoshi in the 1950s remind one of Musashino’s past, present and future.

Kadokawa Culture Museum, filled with the intellectual curiosity and thoughts of many people, is a wonderland of knowledge where anyone can spread their wings and fly freely.