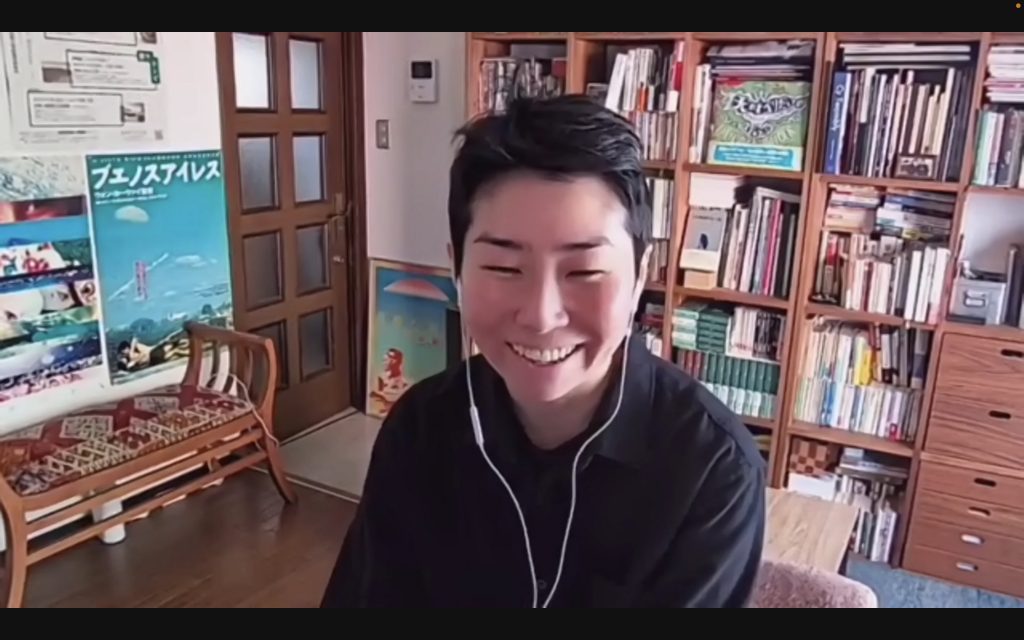 Talents Tokyo is a program to develop young filmmakers in Asia by providing lectures and workshops. We are presenting interviews with past participants in line with a call for applications (from 5/1-5/31) for the 2022 academic year.
In part two, we speak with Kaori Oda, a finisher of the program in 2015, who is gaining recognition in Japan and abroad for her feature film ARAGANE (2015), which focuses on a coal mine in Bosnia, and Cenote (2017), about an underwater cave in Mexico. Asagi Kimura, the Talents Tokyo Award 2021 winner, says she was influenced by this director.

“Being different is lonely but reassuring”

Talents Tokyo 2015, which you participated in, coincided with the time you were studying in the first class of the “film.factory,” which director Béla Tarr opened in Sarajevo, Bosnia, right?

Oda: Yes. I think it was my final year at the school.

Before film.factory, you studied film at Hollins University in the United States. What made you decide to study in this field?

Oda: The only thing I did while a teenager was play basketball. But I tore my ligaments twice, and that slowed me down when running. It was my senior year of high school, and I had a very vague notion to go abroad. So, I went to a rural liberal arts college in Virginia in the United States. I took a course there that focused on filmmaking, and my adviser in my senior year told me to film the “biggest struggle of my life.” I am ambiguous about my gender identity, and as for my sexual orientation, I prefer women. I had never talked to my family about this, so once I made this confession, which I don’t know if I will make into a film, the response was quite harsh. It was almost as if my family was going to pretend that what I had told them didn't happen.

Did you feel like you had made up your mind but was being ignored?

Oda: Yes, that’s right. So, I wondered if I could confirm or face what had happened to us once more through filmmaking. In my first film, Thus A Noizu Speeks (2010), I asked my family members to play themselves and re-create the confession scene. That experience was very intense, and although I had many reflections on it, I saw the potential in the way I communicate through the camera and how I use it as a tool. However, I was burned out and reduced to ashes at one point. At that time, a programmer for the Nara International Film Festival told me that Béla Tarr was going to create a new film school in Sarajevo. I thought that meeting all kinds of people in a new place might change things, so I applied.

The language for communication in Talents Tokyo is English. What was it at film.factory in Sarajevo?

Oda: English. The same was true for classes. In Bosnia, English was generally spoken by everyone except the elderly. But I was surprisingly unable to speak English (laughs). I studied it at the college of Kansai Gaidai University for two years, but I realized in the United States that I could speak almost nothing when it came to conversation. However, many people helped me, and I took classes that were not just about language, such as film and painting, so I managed to graduate. My English skills were not that different in Sarajevo.

How did you raise the money for tuition and living expenses in Sarajevo?

Oda: I had zero savings, and I wrote “I have no money” on my application form (laughs). In Sarajevo, 2 million yen a year was enough to cover my tuition and living expenses. I borrowed 1 million yen from my parents for the first year. In addition, I got about 400,000-500,000 yen in grants, which I didn’t have to pay back. The second year, I received a grant from the Pola Art Foundation, receiving about 3 million yen. When it came time to pay for my third year of school, I managed to graduate with a tuition waiver.

Why did you decide to participate in Talents Tokyo?

Oda: After making ARAGANE as my graduation project at film.factory, I finally felt that I wanted to continue making films. When I was thinking of making something like an essay film next, a Singaporean friend from film.factory told me it would be a good idea to listen to various people and spend some time in a place where I could get to know them. I learned about Talents Tokyo from that friend.

Did you have a specific idea of what you wanted to learn?

Oda: I wanted to organize my ideas at the time by talking about them with others, and I also had doubts about my “pitch.” I still have them now (laughs). But I wanted to learn what my pitch was like and what kind of atmosphere it carried.

Has your impression of the pitch changed?

Oda: I had believed it was important to make the words easy to understand in order to sell the film, but the person who received the award in my year was a Malaysian named Lau (Lau Kek Huat), and his pitch resonated most, with me as well. He did not choose his words to sell the film in an easy-to-understand way. He conveyed in a very simple way that he really wanted to make the film and that he needed support to do so. I remember feeling that maybe I was just overthinking from a certain perspective.

For both ARAGANE and Cenote, you didn’t have a clear idea at the beginning of what the finished films would look like, but rather you allowed them to take shape as they were created. But when you present a pitch, you have to be somewhat specific and say, “This is the kind of film I am talking about,” right?

Oda: Yes. Because I cannot do that, I have never received money for a film that requires a pitch, or a concrete proposal or a script. In the case of Cenote, I received production funds from the Chishima Foundation for Creative Osaka and the Aichi Arts Center, but the rest came from my own savings and from Mexican friends who worked on the film with me. It may be possible to use your name as collateral if you already have a track record, but for young artists like ourselves, there are no guarantees. If I consider that kind of funding support, even I wouldn’t give it to them (laughs). That is the dilemma. But I have come to think that even when I only have a vague idea of what I want to say, I need to make an effort to put it into words. In that sense, I think I need to learn more about what I saw during the Talents Tokyo program.

What happened to the film project for the essay you submitted to Talents Tokyo?

Oda: I participated in Talents Tokyo in November 2015, graduated from film.factory in February 2016, and returned to Japan. The editing period took until about April and it was completed later in spring. The world premiere was screened at the International Leipzig Festival for Documentary and Animated Film. I also toured several other film festivals. When I had my own special screening in Japan, it was titled Ano yasashisa e (Toward a Common Tenderness) (2017) and was shown along with Thus A Noizu Speeks.

After you participated in the Talents Tokyo program, did you find that it helped expand your horizons?

Oda: In terms of points of contact, I even went to see the film of Lau, the Malaysian, when it was completed and screened in Osaka, and congratulated him. The year I participated, everyone was very serious and all they did was make films, so maybe I should have played around more (laughs). To be honest, I think that people who really have something they want to do or create will do it without going to a film school or Talents Tokyo. But it is also lonely to make a film and complete it by yourself from beginning to end. It is fun to make a film by yourself, but there is another pleasure in discussing it with various people. Also, everyone has a different way of doing things. The way we perceive films and the way we perceive filmmaking are also different. It is lonely to discover that you are different from others, but it is also reassuring to know that it is okay to be different. I think I was very lucky to have been able to go to film.factory and Talents Tokyo.

Born in 1987 in Osaka Prefecture. Filmmaker/artist. Oda explores human memory (voice)—Where did we come from and where are we going?—through images and sound. In 2013, she participated in film.factory, a young filmmaker development program spearheaded by filmmaker Béla Tarr, as a member of its inaugural class and completed the program in 2016. Her first feature film, ARAGANE (2015), about a coal mine in Bosnia, won a special award in the New Asian Currents section of the Yamagata International Documentary Film Festival. In 2019, Cenote, which features an underwater cave in Mexico, was completed. She had screenings at the Bright Future competition of the International Film Festival Rotterdam and traveled around the world. In 2020, she received the first Oshima Prize. She was awarded the 71st Minister of Education, Culture, Sports, Science and Technology’s Art Encouragement Prize for New Artists
https://www.fieldrain.net/

In order to strengthen creation and dissemination of culture from Tokyo in the field of film, the program brings young Asian filmmakers and producers to Tokyo with the aim of fostering talents who have the potential to become masters for the next generation. The program provides young Asian filmmakers and producers with the know-how and opportunities to build international networks in order to become active on the world stage. The program is currently accepting applications from May 1 to May 31.

Dates: October 31 to November 5, 2022 (6 days during the TOKYO FILMeX 2022)
Venue: Yurakucho Asahi Hall, etc.
Eligibility: Aspiring film directors and producers in East and Southeast Asia
Number of people to be accepted: Up to 15 from Japan and other Asian countries
Due to the recent outbreak of COVID-19, content of the program may be subject to change.
Organizers: Tokyo Metropolitan Government, Arts Council Tokyo (Tokyo Metropolitan Foundation for History and Culture), Talents Tokyo Organizing Committee
In Cooperation with: Berlinale Talents
In Collaboration with: GOETHE-INSTITUT Tokyo
Website: https://talents-tokyo.jp/