Let’s talk about the play now 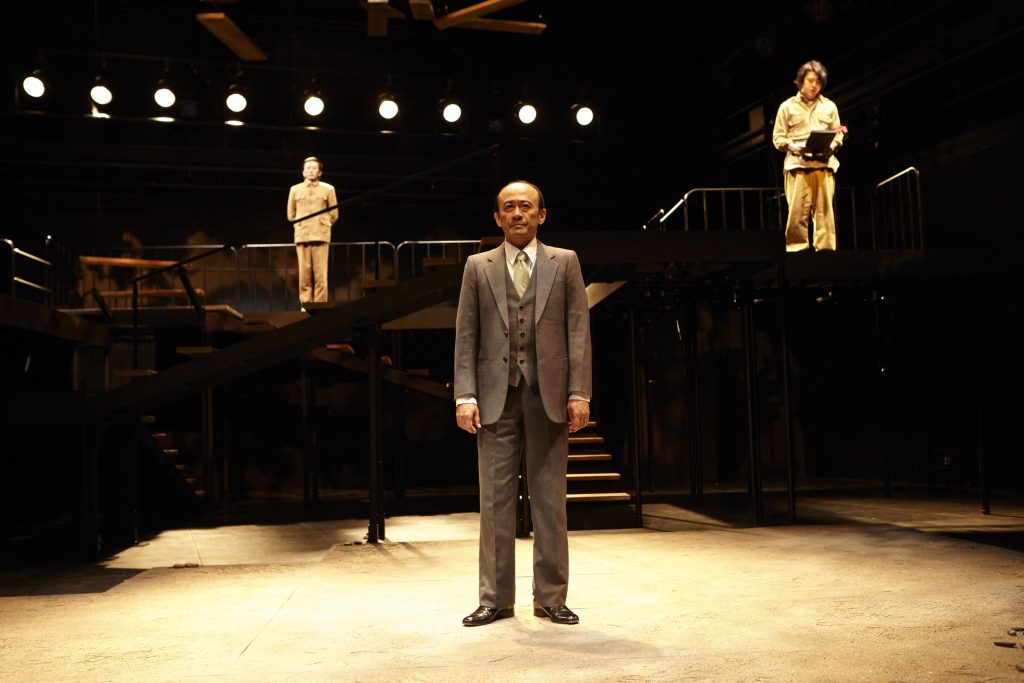 Chocolate Cake Theater Group is a theater group that continues to present, to great domestic and international acclaim, profound and elaborate works inspired by actual events from the modern history. In the midst of the COVID-19 pandemic, Chocolate Cake is garnering much attention for its new endeavors. President Yusuke Hisawa and actors Yuki Nishio and Atsushi Okamoto participated in an online discussion via Zoom on the history of the theater group and the future of theatre.

Established in 2000, initially the Chocolate Cake Theater Group presented mainly comedies, but since it welcomed Takeshi Furukawa as playwright in 2009 and Yusuke Hisawa took up the duties of stage director in 2010, the group gradually established its current style, and has been creating plays dedicated to various historical themes, such as the Asama-Sanso Incident, the High Treason Incident, and Nazism.

Hisawa: The beginning of the theater group can be traced back to our days at the Drama Study Club of Komazawa University, where five of us once talked about our ambition to perform, at least once, somewhere outside the university, before graduation. We presented our first play, Sorega kotaenoyona (“Something Like an Answer”), in 2000, so if we count from there, the Chocolate Cake Theater Group celebrates its 20th anniversary in 2020.

Hisawa: In February 2021, we performed Kikan Funoten (“Point of No Return”). In the play, former members of the Total War Research Institute, a government organization that actually existed during World War II for the purpose of simulating the total national warfare, meet after the war to reminisce about the old times over drinks. Many of the scripts that Takeshi Furukawa writes have a complex structure and, on top of that, deal with themes that are sensitive from a historical perspective, but so far, we have seldom had actors clash over the content of the plays.

Okamoto: It would be a lie to say that we never fight, but we usually hash out even the small details. Many of the scripts are quite hefty and apparently that creates the impression that members of the group get into fistfights over the interpretation of the content. (Laughing)

“Actor Camera”: an approach born from the measures to fight the COVID-19 pandemic

Hisawa: Ever since a state of emergency was declared in April 2020, we have considered various measures to ensure that the audience can watch our performances safely and with peace of mind. In July, we distributed by video the performance of the play Mui (“Fearlessness”). In addition to the video distribution of performances, we also adopted the “Actor Camera” approach. Nishio, who was part of the cast of the play, attached a body camera to the side of his head and filmed the play as he performed.

Nishio: When I first attached the body camera during rehearsal, I was surprised at how difficult it became to move the way I am normally used to on stage. I feel that in the actual performance, however, I managed to successfully deliver my part as an actor, while moving my head to capture the right angles as an operator. If I have more opportunities to use such a body camera in the future, I would like to apply the process of trial and error to find ways to combine efficient filming with skillful acting to assert my presence on stage. In any case, the Actor Camera approach is sure to remain part of theatrical performances in the future.

Born in 1976. Established the Chocolate Cake Theater Group in 2000 with the participation of former graduates of Komazawa University. Hisawa served as manager of the group while also remaining active as an actor, but after the 17th play, Soyu Mononi... (“For such a thing”) (2010), he added to his duties that of a stage director. Since then he has been active as a stage director within and outside the theater group.

Born in 1979. Participated in all works of the Chocolate Cake Theater Group since their second play Hero (2002). In recent years, he has performed in a Rakugo group composed of actors under the stage name Natsubatei Yugao.

Born in 1983. Embarked on the path of theatrical performance after enrolling in Waseda University. During his student years, he was active as an actor both within and outside the university. Nishio has been participating as a guest performer in all plays of the Chocolate Cake Theater Group since its 17th play, Soyu Mononi... in 2010 and formally joined the group in 2012.

Let’s talk about the play now