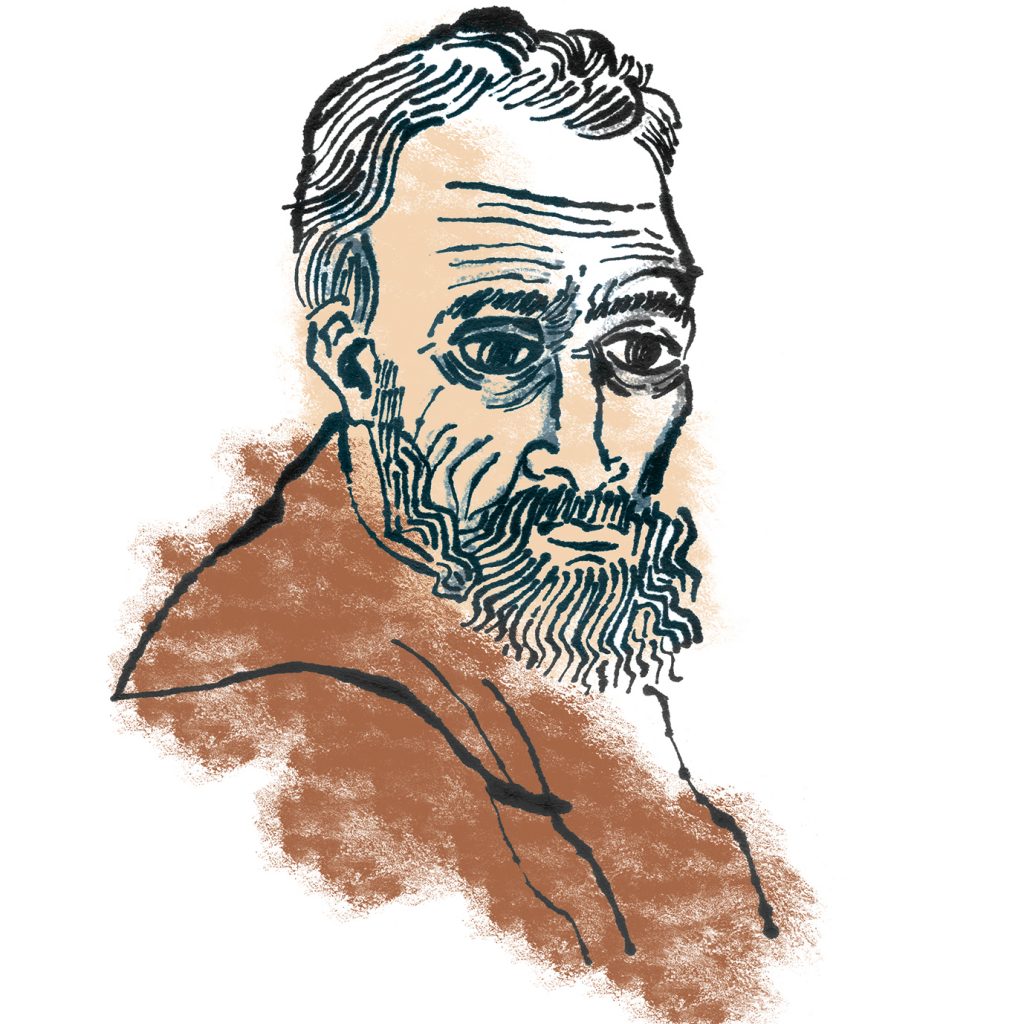 A master of the Italian Renaissance, Michelangelo (1475-1564), is well known for several of his masterpieces, including “David,” the mural on the Sistine Chapel ceiling and “Last Judgment.”
In addition to paintings and sculptures, his accomplishments have been recognized in architecture and poetry. His achievements have been transmitted by word of mouth even today, more than 450 years since he passed away.

Born in Caprese, Italy. A great artist in the Renaissance era who exerted an unparalleled influence on art history. His achievements cover sculpture, painting, architecture, poetry and more.

Michelangelo lived in Florence during his childhood. He saw great works of sculptures and paintings when he went church every Sunday with his family.
That experience must have had an influence on him in his later life.
While learning Latin when he was 9, he spent time drawing sketches.
His father punished this behavior, because in Italy at that time, artists were treated the same as servants to noble families.
However, Michelangelo’s passion for art was not satisfied. He became a painter’s apprentice through a friend, opening the gate for him becoming an artist.

When 26, he received an order to make a statue of David, a Biblical hero.
The client was Piero Soderini, an Italian statesman of the Republic of Florence.
It was huge figure of more than 5 meters tall. Michelangelo portrayed David looking forward just before a battle. The completed statue received great acclaim from the public, although Soderini complained “the nose is too thick.”
Michelangelo quickly grabbed marble dust, climbed up the scaffold and pretended to alter the nose, although he didn’t touch the figure at all. When Michelangelo dropped marble dust, Soderini was satisfied. Michelangelo had known how to maintain his dignity as an artist without rebelling against authority.

Michelangelo’s 16th century Italy was in chaos including political turmoil and religious conflict. In 1529, his hometown of Florence was surrounded by the Holy Roman Empire. His patron, the Medici family, joined the Roman Empire side. On the other side, Michelangelo was appointed general director to build a fortress to protect Florence. Some of the local troops suspected Michelangelo of being a Medici spy. However, he concentrated on designing the fortress.
Later, his ability as an architect was recognized, and he designed the Capitoline Hill (Piazza del Campidoglio) political hub in Rome, and the dome of St. Peters Basilica in Vatican, a religious hub. Michelangelo persisted in his belief as a citizen of Florence and left various great works for history. [End]