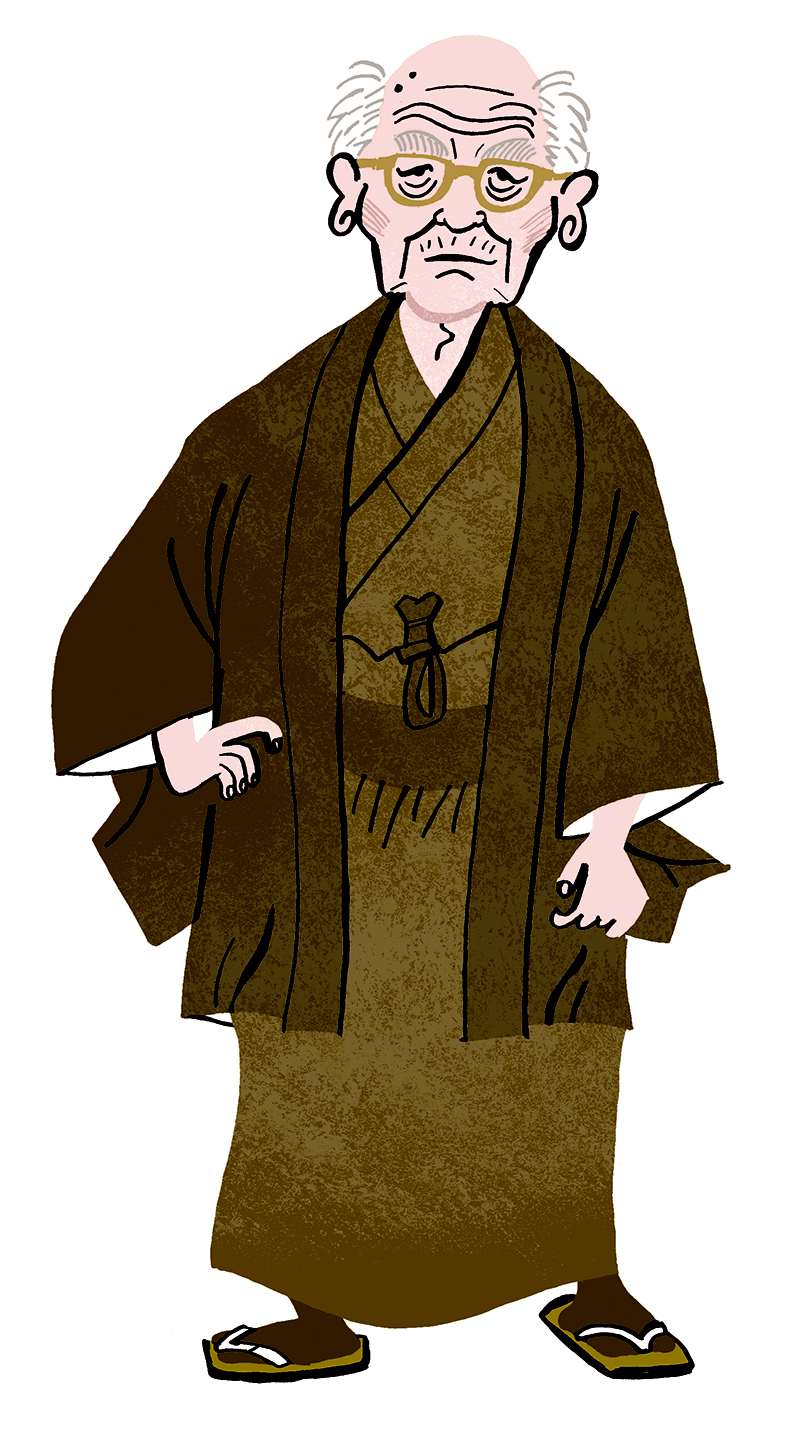 This installment presents Denchu Hirakushi (1872-1979), a master in Japan’s world of modern sculpture and recipient of the Order of Culture in Japan. Even at the age of 100, he was active in creating works reflecting strong passion. He left behind words of wisdom and episodes imbued with the human touch.

Born in Ihara, Okayama, in 1872. A sculptor known for a realistic style executed by outstanding technique. His representative works include “Tensho,” “Uyu Sensei,” the Kabuki Dance “Kagamijishi,” and “The Angler at Izura (Portrait of Tenshin Okakura).”

Denchu lived to be 107. In his later years, he drew calligraphy stating, “The 60s and 70s are a still wet-nosed brat. For men, the virile age comes at 100 or over.” “Do it right now, otherwise when you can do it, if I won’t do it, who will do it?”
Once, while in his 90s, Denchu visited an exhibition along with a ceramist who was also native of Okayama. The ceramist, who was in his 70s at that time, suggested that they take a taxi because he was tired. However, Denchu was upset at this because the ceramist was younger but lazy. Denchu started lecturing him on manners.

Denchu received the Order of Culture in 1963 when he was 90. He was recognized as a leader among sculptors working in wood.
On the award-ceremony day, Denchu was asked by the Emperor, “What is the most painstaking thing?” He replied, “Getting something to eat.” He took about 20 years to create “Kagamijishi.” The Japanese government tried to purchase the piece with 200 million yen for the completion of the National Theatre. However, Denchu said, “I don’t need any money. This piece was not created by myself alone. I created it together with Rokudaime (VI) Kikugoro.” The work was then donated to the Tokyo National Museum of Modern Art. It is displayed in the lobby of the National Theatre even today, where it continues to dazzle visitors.

An important person who influenced Denchu when he was young and his entire artistic career was Tenshin Okakura, an authority of Japanese art studies. Tenshin gave him advice, saying, “You are creating things that can be sold. That’s why those things are not to be sold. You must create things not to be sold. Then, things will be sold.”
Denchu created a number of Buddhist sculptures at the Japan Sculptors Association founded by Tenshin. “Jingyu” was created with the theme of the way to Zen enlightenment. Denchu identified himself as pursuing true art in the form of an old man chasing a cow. Tenshin, who highly appreciated “Jingyu,” didn’t have the chance to see the completion of the work. He died at the age of 52. During the funeral, Denchu cried and showed one of his works to the deceased Tenshin. It was “Jingyu.”[End]