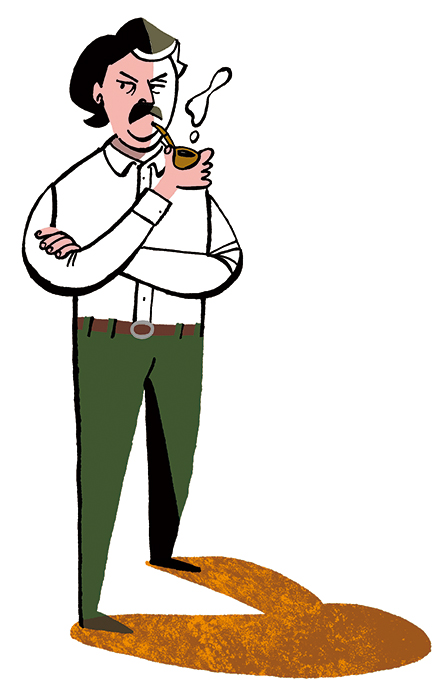 Van Gogh and Gauguin lived together for two months and created a number of masterpieces that were inspired by their relationship. This sequel focuses on Gauguin. Born in France, he spent about six years in his early childhood in Peru. He discovered his thoughts between the West and the “primitive.” After living with Van Gogh for two months, he moved to a South Pacific island seeking out the “primitive,” and he created a number of masterpieces there.

Along with Van Gogh, Gauguin is also a representative painter among the post-impressionists. As with “Tahitian Woman,” his works are marked by drastic composition and color fields.

Van Gogh created paintings inspired by the world around him. By contrast, Gauguin sought to express in paintings an invisible world. He looked for a place where modernization had not yet reached. He moved to Bretagne in northwestern France and portrayed local people and their simple lives.
As to symbolize his style, he noted in a letter, “Not to draw too much along with the nature. The art is one of abstraction.” (1888).
In a letter sent to Van Gogh before he left for Arles, he write, “I believe I was able to express decent simplicity in human beings with innocence and a belief in superstition.”

Gauguin moved to Arles, southern France, in October 1888, where Van Gogh was waiting.
The two painters were contrastive in their styles, so they often argued, and their life of collectivism didn’t last long. Van Gogh, however, admired “The Wine Harvest, Human Misery,” painted by Gauguin in Arles. Van Gogh wrote in his letter to his brother Teo, “Now, he is drawing women in a vineyard completely from memory. If he completes this painting, and doesn’t abandon it midway through, it will be an unparalleled masterpiece.”
This was just one month before the ear-cutting incident, which split them apart.

Gauguin later looked back on his life with Van Gogh.
“The breakup came abruptly. Even though I was concentrating on my work, I feel that period lasted a century. Two men worked there on works that were hugely valuable to both of us, unknown to the public.”
Eleven years later, after Van Gogh’s death, Gauguin painted “Sunflowers on an Armchair” on Tahiti, a South Pacific island where he moved to seek “primitiveness.” As if in reply to “Gauguin’s Chair,” painted by Van Gogh, the sunflowers are placed on the armchair. [End]