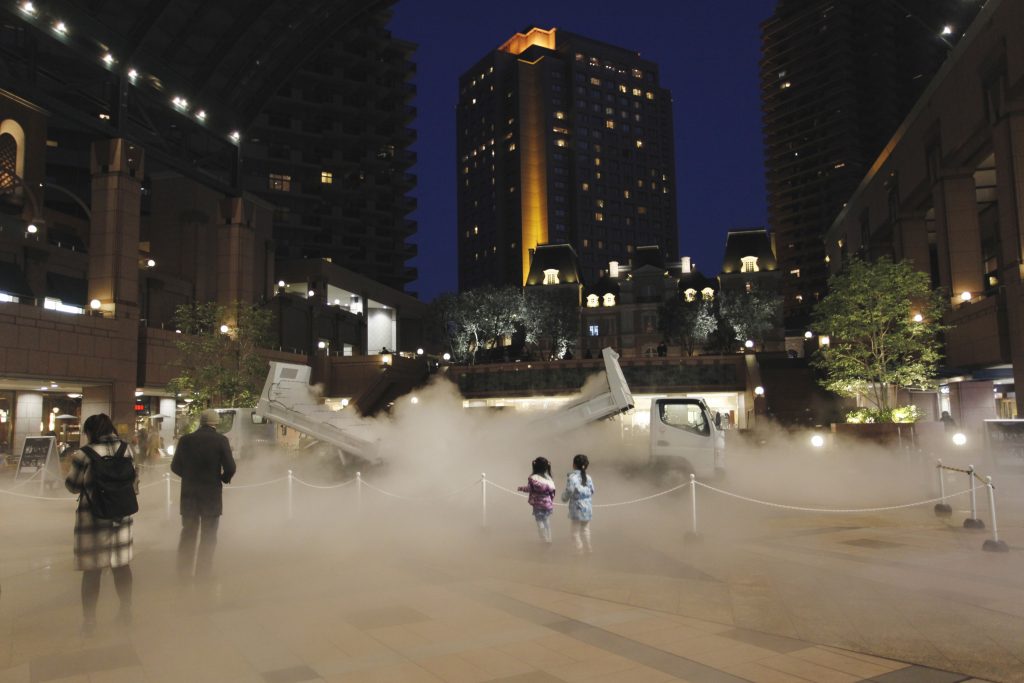 The Yebisu International Festival for Art & Alternative Visions is an annual event held at the Tokyo Metropolitan Museum of Photography (now the Tokyo Photographic Art Museum) and several other venues (February 11-20, 2016). Because the museum was closed for renovation during this year’s event period, the Garden Hall, which is located in the same complex, served as the main venue.

“Garden in Movement” is this year’s theme. It was borrowed from a book by a French gardener, Gilles Clément, “Le Jardin en Mouvement,” published in the 1990s. As a gardener, he practices shifting ordinary perspectives like a garden, which can be created by nature, not just by humans. Works that re-examine the relationship between nature and humans, depicting how humans remain in nature, will be introduced. Also, contemporary society is considered a garden that transforms every day. Also showcased will be works incorporating man-made technology and invisible “networks.”

A sculpture made of fog created by Fujiko Nakaya is a large-scale piece and will be presented at the Yebisu Garden Place. Visitors will see how artificial fog generated by scientists and engineers will go with natural winds, air and also the involvement of visitors.

At the Yebisu Garden Cinema, 12 films will be screened. “Garden in Movement” by video artist Kenichi Sawazaki is an 85-minute piece documenting Gill Clément.

In The Garden Hall, Hiraku Suzuki, who expands a two-dimensional drawing into space and time, presents two works. Chris Chong Chan Fui’s “Endemic” series comprises artificial flowers that grow only in the Mount Kinabalu area of Malaysia. He identifies the species with indigenous people’s fate.

“Bug’s Beat” by Yumi Sasaki+Dorita offers the chance to listen to sound created by living insects, while antlions draw on sand and mineral pigments, in “Hagenomyia pictorica” by Yuji Dogane. These must be this year’s special because basically, living insects cannot be exhibited in museums. At STUDIO38, Maki Ueda creates spatial expressions from scents.

The other works include “Land Art,” which became popular in the ’60s-’70s in the United States, and live events entitled “Garden in Movement.”

A total of 132 works by 73 artists from 26 countries and regions are gathered for this festival.

Original text was written in Japanese by Emi Sato Edited and translated by Kae Shigeno.