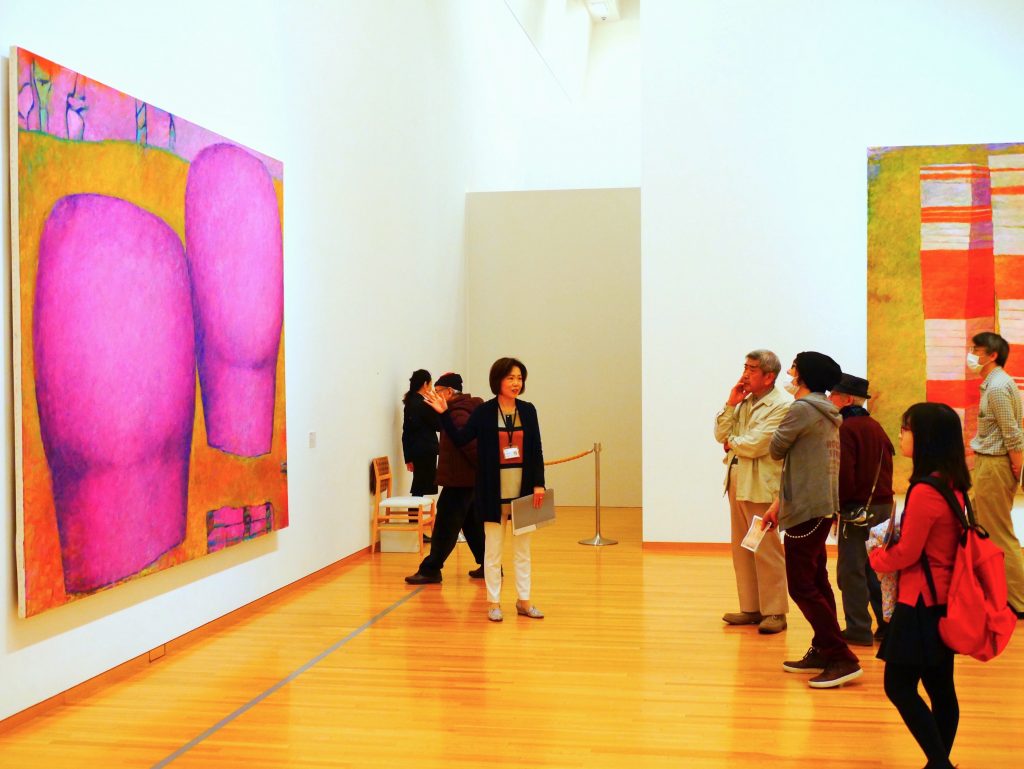 MOT provides a talk at its Collection Gallery every day at 2 p.m. A reporter joined one of the talks.

The MOT Collection is highly evaluated among art buffs for its rich and established works. The Collection Gallery rotates works on display periodically (almost three times a year). Currently on show are works categorized as Pop Art that the museum has been actively acquiring since its opening, paper works that have rarely been on display, and works by Yasuko Toyoshima and Toeko Tatsuno for exhibitions with a special focus.

One talk was conducted by Mie Takeuchi, a veteran volunteer who has fulfilled this role since the museum opened.

Ms. Takeuchi explained about a large-scale installation entitled “without records—mot ver. 2015” created by Yoshihide Otomo + Yasutomo Aoyama + Takayuki Ito was given a role different from producing songs or music, as record players are made of metal, plastic and rubber.” Old-fashioned record players (without records) were turned on to produce mechanical sounds.

In the Pop Art room, she explained that Marilyn Monroe in 10 pieces of silkscreen, the artist Andy Warhol critically examined the power of the imagery of mass-media, mass-consumption and capitalism.

David Hockney is a representative of the British art world. “A number of photos captured one person taken from slightly different angles. You can see various scenes of what happened in the space and time sequences at the same time.”

“Honey-pop” is a chair made of paper designed by Tokujin Yoshioka on display in the room entitled “Paper Works.” “He designed this by borrowing a honeycomb structure. It is paper but strong enough to be sat on. This shape was formed in the way Mr. Yoshioka himself sits.”

Yasuko Toyoshima is known for her conceptual works since her debut in the 1990s. “Social rules, formalized behavior, Ms. Toyoshima has created works that question existing social systems and asks her what forms ‘herself’,” explained Ms. Takeuchi. With wooden panels hanging on the walls, Ms. Toyoshima critically examines “paintings” and “art museums” as a system. Ms. Takeuchi guides the participants to see the backside of the panels on display. You can see extensive workmanship on the backside of each panel.

On the third floor, works by Toeko Tatsuno, a printmaker and oil painter, are featured. “Rose Colors Ahead, Behind” was painted in 2011.

The last room is a totally dark space where we can see numerous red LED digital counters. “From 1 to 9, the numerous digital counters are blinking. One goes fast and the other goes slow. This work encourages viewers to imagine life and death, or many other things.”

“I like the work by Tatsuo Miyajima best,” said Ms. Takeuchi who has worked as a guide for more than 20 years. There are 29 volunteers at the museum, serving as bridges between the museum and the visitors. Ms. Takeuchi always holds a special notebook to take notes on works and artists she learned about from the museum curators. She enjoys encountering members of the younger generation who have become contemporary art fans.

MOT Collection: Collection Ongoing was held through Sunday, May 29, 2016.

The Museum of Contemporary Art Tokyo is temporarily closed from May 30 (Mon) for large scale renovation work. All equipment will be checked and upgraded due to aging. As a public facility, the museum will be reborn after a long period absence. We thank you for your understanding and continuous support as we had until today.