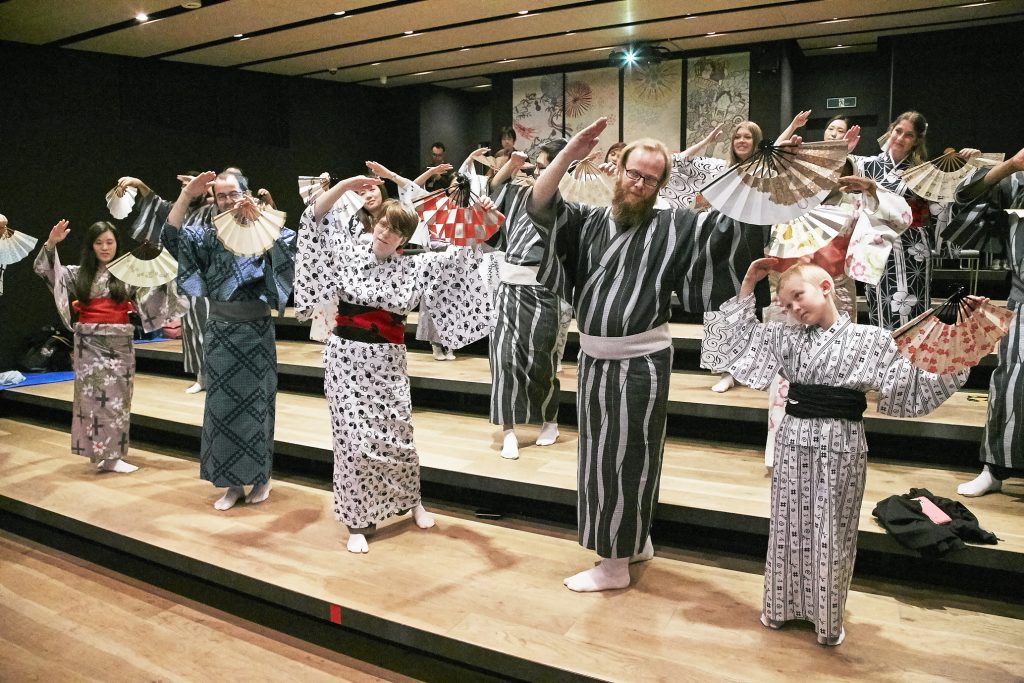 Participants learn how to use a maiogi fan
イベント
Share

For foreign visitors to Japan, the Arts Council Tokyo organizes hands-on workshops at the Tokyo Metropolitan Edo-Tokyo Museum in Tokyo’s Ryogoku (workshops on Japanese traditional entertainment on Saturdays) and at the Asakusa Culture Tourist Information Center (Japanese traditional performing arts on Sundays). Visitors can view and try authentic traditional arts directly, learning about them in a short time.

Wearing hakama, a traditional Japanese formal skirt worn over a kimono, Michiyo Kagami’s performances started with an explanation of the meaning of Daikagura.

It is reputed to have begun more than 1,000 years ago with the purpose of serving as a talisman for people, chasing away evil on behalf of the grand Shintoism shrines. Daikagura was originally a sacred and serious performance. The Shishimai lion dance, also performed to expel bad luck, may be a bit more familiar.

Japanese people can easily relate it to religious roles. However, foreigners especially from the West see it as a form of juggling, rather than a religious ritual. So, she explained simply, saying as you smile, good luck will come.

Gokai Chawan or five-storey building builds a tower using sticks, two balls, teacups on a board, while she holds the arrangement in her mouth.

The visitors gave a big round of applause.

All the visitors were given a thin paper tape. They were requested to fold it vertically, and put it on their chin and keep there as long as possible. This is called kamitate, or standing paper.

To keep it straight, visitors moved back and forth. The key point is to be able to see the top of the paper tape. Three volunteers out of all the visitors took part in the competition. David from Hungary, who was in Tokyo with his friends for the first time, was the winner. They joined this program and thought they were very lucky because it was a very rare chance to enjoy an authentic traditional program first-hand.

Visitors enjoyed performances by Michiyo during the 30-minute program.

Every Sunday, a one-hour program for foreigners to wear yukata and learn traditional Japanese dance is held.

Firstly, the participants are offered a pair of Japanese tabi socks.

With koto music in the background, people from Europe, the Americas and Asian countries were ready for their lesson. For most, wearing yukata is a first-time experience. They looked a bit cautious but excited at the same time.

Once all participants were ready, Seikuro Hanayagi, the day’s lecturer, came on stage and started the lesson. The title of the song is “Sakura,” Japan’s best-known traditional piece.

Nihon buyo is said to refer to kabuki theater dance. Men dancing women’s style is common. This is quite rare elsewhere in the world.

After a demonstration by Hanayagi, visitors learned how to use a maiogi fan. Maiogi is used during the Nihon buyo dance to describe various scenes. If you move it from your head downward like the fan is floating down softly, it means snow, while a horizontal movement means wind, and upside down means a mountain. It is important to imagine scenes while moving the fan.

Once participants learned through a course of patterns, they practiced along with the song. They had to pay attention to many things, such as placement of their feet, direction of hands, etc.

Once again, participants practiced along with the instructor’s demonstration. Then, finally, they performed dancing.

The participants found it seemed natural and mastered the dance. What was the reality?

Original text was written in Japanese by Erika Ikeda. Edited and translated by Kae Shigeno.