Feel the Music in Your Body Music Workshop 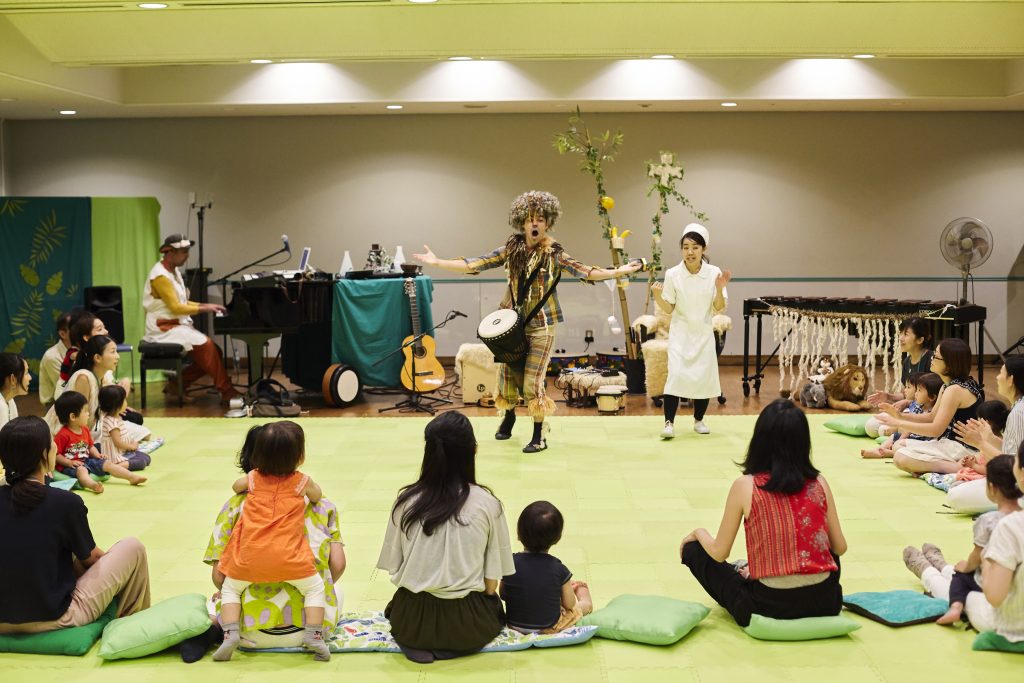 The Tokyo Bunka Kaikan presents a special music education program in cooperation with Casa de Musica, a Portuguese music facility. The program offers more than 20 workshops for participants of all ages. Here are reports from four workshops held in 2016.

Children aged from 6 to 18 months and their mothers enjoyed the following two workshops.

A workshop leader from Casa de Musica visiting from Portugal led this program, which incorporated African musical instruments and music. As a lion with a bushy mane and beard silently slinked into the room, the workshop leader yelled, “Here comes a lion!” and the music began.

The lion sang a song in an African language along with rhythms created by an African drum called a djembe. The rhythm was so captivating it even entranced a crying baby, who settled down and enjoyed the performance.

This performance, which incorporated gentle, pleasant music created with a piano and flute, began with a singing forest fairy named Hana. Hana, rain fairy Shizuku and sun fairy Hikari worked together to create a story about growing flowers from seeds.

Hana had found a large seed, and suggested that they all work together to make the seed bloom. Hana then distributed colorful cloths to the participants, who gathered around, balled their cloths together and recited a magical spell.

But seeds won’t sprout without the help of the sun and rain! Hikari started to sing “Sun, sun, sun” as fruit-shaped maracas were distributed to the participants, who shook the maracas along with the song.

Next, it was Shizuku’s turn. As the flute played a nursery rhyme with the theme of rain, Shizuku lead the mothers in a chant. Finally, Hana invoked one more magical spell, chanting “Pip, pap, shu, shu, shwaaa!” as the seed opened and a big flower appeared. The three fairies and all the participants sang together to bring the performance to a close.

Treasure Box in the Sea

(Pre-school children were invited to join this workshop.) The participants, 1- to 2-year-old children and their mothers, were led by workshop leaders Sally and Noggy, who came from the bottom of the sea. The program began with a song by Sally as the participants clapped along.

“Here are two treasure boxes,” said Noggy. As Noggy recited a magic spell, one of the boxes opened, and underwater friends like jellyfish, fish and crabs popped out, dancing along to piano performances of Tchaikovsky’s “Waltz of the Flowers” and Johann Strauss’s “Radetzky March.”

The next treasure chest was opened to reveal a snail. Sally put it to her ear and said, “I can hear the voice of a whale! He says he’ll bring his friends here.” The assembled mothers and children sang along with Sally, calling forth the whale’s friends.

Suddenly, the venue turned dark, and a host of underwater friends appeared over the group’s heads.

The workshop ended as the participants took maracas in their hands and enjoyed dancing to “Mambo No. 5.”

Participants over 65 also joined in for this edition of “Sing & Beat,” a workshop for both children and adults. First, the participants held the hand of the person next to them and a large circle was formed. Following along with George, the workshop leader, the participants moved their hands and legs in a rhythm as George sang, “Please follow me…”

“Please put some words to the music,” added George, and the participants chimed in with words like “sakura (cherry blossoms),” “saita (in bloom)” and “asagao (morning glories).”

The participants were divided into two groups and sang “sakura saita asagao” in a round. They walked as they sang, making rhythms with their hands and tapping their knees in a beautiful melody.

Next came a journey to the Amazon. Following Joanna, the leader, the participants made the sounds of birds, raindrops, and the wind. Then the group transformed themselves into a school of fish, moving through the ocean and singing along to a beautiful mermaid melody.

The final step on the journey was a trip to Portugal. Traditional Portuguese songs were sung with Japanese lyrics, as the participants made a large circle again, singing and dancing with smiles on their faces.

The Music Workshop Festa was held in October 2016 with 17 workshops in collaboration with Casa da Musica and Tokyo Bunka Kaikan.

Original text was written in Japanese by Emi Sato. Edited and translated by Kae Shigeno.