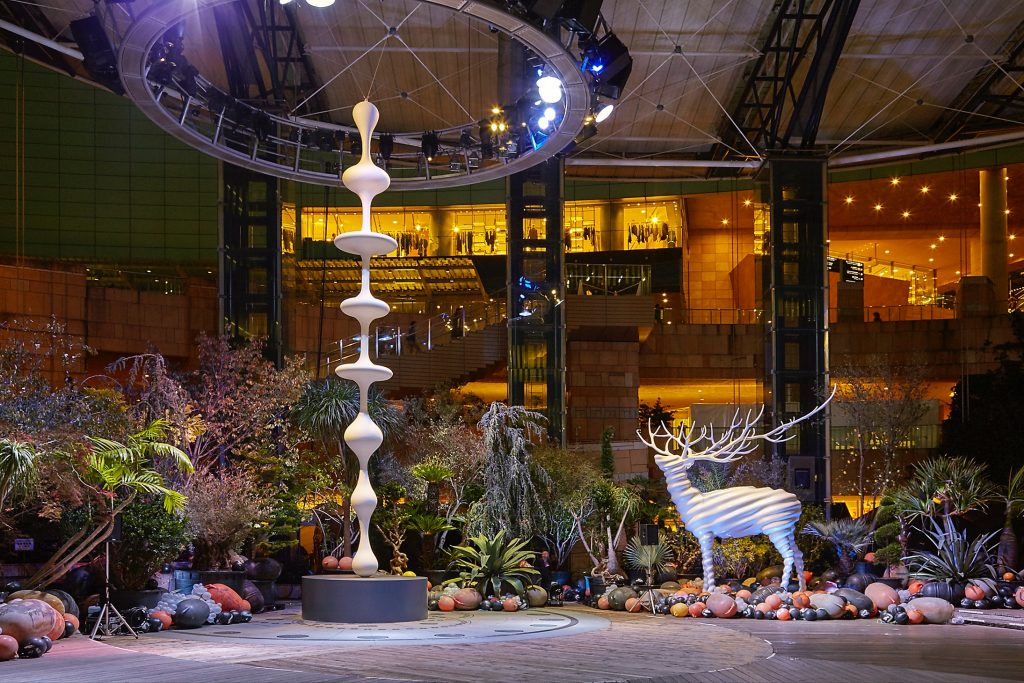 Roppongi Art Night is a one-night celebration staged in the Roppongi district. It was held from October 21 (Fri.) to 23 (Sun.), 2016, to coincide with the World Forum on Sport and Culture, an international congress, held around the same time.

Installations by Kohei Nawa connect the metropolis with regions

Some 200 works by 70 artists were brought together at Roppongi Hills where the Mori Art Museum is located and Tokyo Midtown, the location of the Suntory Museum of Art and 21_21 DESIGN SIGHIT, also at the National Art Center, shrines, parks and commercial buildings.

Kohei Nawa was featured as the Main Program Artist. He collaborated with Seijun Nishihata, a plant hunter who travels the world in search of rare plants, and Daisy Balloon, a unit of balloon artists who create unconventional works with outstanding imagination and who made a “forest” hat symbolizing the dawn of culture in Roppongi.

The sculpture entitled “Ether” was at the center of the forest.

The works were connected to Nawa’s other pieces that he created on Inujima island in the Seto Inland Sea during the Setouchi Triennale in 2013 and 2016. They will be taken to Tohoku to be installed on the coast of the Oshika Peninsula in Miyagi Prefecture during the Reborn-Art Festival 2017.

The sculpture “Ether” (8 meters tall) expresses the relationship between gravity, space and life. Its shape presents a scene of liquid spilled over a floor. Another sculpture, “White Deer,” (6 meters tall) recalled small pieces that Nawa created on Inujima every three years with motifs based on myths on the birth of the Japanese archipelago. The White Deer was growing while it traveled through Japan and met Ether in Roppongi. In Japan, the deer has been known as a messenger of God since ancient time, but today this deer is wandering the city seeking food.

Works at the Tokyo Midtown featured images of young growing plants. While at the National Arts Center Tokyo presented old trees. Starved olive trees are entwined with each other and pushing a wagon of “cloud” moving around the Ether.

The press preview on October 20, 2016, featured “FierS à Cheval” (Proud Horse) by Compagnie des Quidams. The company is a spectacle performance group based in France. They staged their new program in which the performers wore white feather-like costumes and danced along with music. The ringmaster gave power to the performers to transform them into horses.

The artworks look manual rather than spectacle, but the performers’ elegant movement created a fantastical world.

Tokyo Caravan is a leading project guiding the cultural program for the Tokyo 2020 Olympic and Paralympic Games. Hideki Noda, a playwright, director and actor, devised this new movement. Starting out from Rio de Janeiro during the 2016 Summer Olympics, this movement pops up in various locations both in Japan and overseas to present a “Grand Cultural Circus.”

“In the digital media era, I want children of the future to embrace the interests of those who are breathing right in front of their eyes,” Noda said.

“First Steps toward Art, Design and Disability” was a three-day exhibition of artwork created by people with disabilities in cooperation with industry and designers. There were artificial legs for athletes, wheelchairs and design drawings.

Reporting sessions of TURN, its collateral program in Brazil, were held six times in three days. TURN is a project supervised by Katsuhiko Hibino, an artist, and was started in 2015.

In the summer of 2016, four artists were involved in this project in Rio de Janeiro, Brazil, where the Olympic and Paralympic Games were held. While staying in Sao Paolo, the artists held workshops in welfare facilities and created works.

Experience at La Mano is a passport to PIPA in Brazil

La Mano is a craft studio in Machida where people with disabilities work. “Mano” means hand in Spanish. Igarashi works here, and he presented installation works at “TURN Fes.” His works were indigo dyed strings with his image of jumping into the ocean.

“At first, I mimicked behavior by just creating something. Later, they opened their mind to me. My experience at La Mano became my passport to PIPA,” said Igarashi.

PIPA in Brazil conducts life therapy. Igarashi commuted to the facility at 8 a.m. every morning and then went on runs with the children there. Once Igarashi started winding strings, he found there were children who were good at winding, others who liked picking the string and discovered by themselves what they liked.

“At La Mano, everyone is working in his or her specialty. They are then confident with their work,” said Takano.

The talk session was concluded with the comment, “We will put value on each person’s personality, relationships and diversity that can only be born with that person, rather than focusing on the aspect of the ’Art Brut’.”

Art meets the other side of self

“Exchange Diary” is a collaboration work by Aya Momose and Korean artist Im Heungsoon. Each artist shot a short video of a place they visited and then added their own narration based on their impressions of the visual images. That may have something in common as the other side of self.

Motoi Yamamoto draws his work entitled “Labyrinth” with salt to meet the soul of his late younger sister. Viewers pray over the work.

“Love Me” by Choi Jeong-Hwa and “Pigpen” by Saeborg contain a bit cynicism, while “Man of the Wheel” by Kurumi Wakaki stood out in the viewer’s mind.

Roppongi Art Night 2016 may have suggested seeking contact points with others.

Supervised by Katsuhiko Hibino, an artist, TURN is an art project that brings together people of different backgrounds and customs.

TURN Fes was held at the Tokyo Metropolitan Art Museum on March 4-6, 2016, while “TURN in Brazil” presented artworks.

Original text was written in Japanese by Emi Sato. Edited and translated by Kae Shigeno.

An event that started in 2009 to propose lifestyles that celebrate the enjoyment of art in everyday living. Not limited to artwork, it also encompasses design, music, video and performance pieces, which are scattered throughout the Roppongi area. The event started as a one-night celebration in spring but from October 21-23, 2016, it started to be held for two nights and three days.