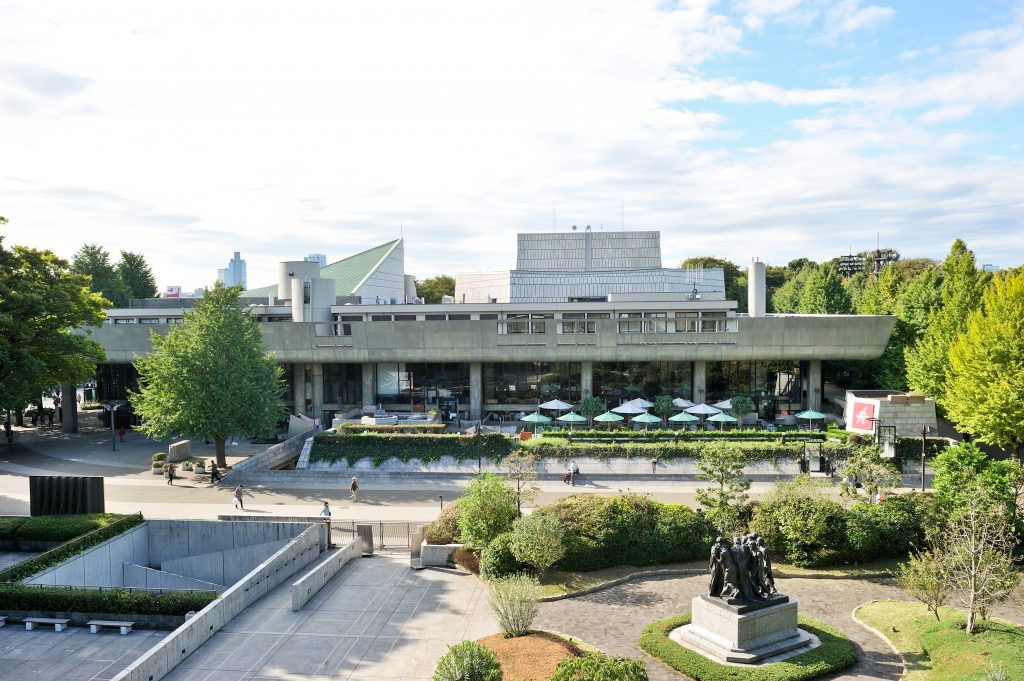 The Tokyo Bunka Kaikan Backstage Tour (Architecture) was held in January 2017. Architect Isamu Yoneyama, who is also a research staff member of the Edo-Tokyo Museum, took us on a guided tour around the building.

The limited colors and complexity of space

In 2016, buildings designed by the legendary master of modernist architecture Le Corbusier were added to the Official World Heritage List, bringing much attention to the National Museum of Western Art, Tokyo. Across the street from the museum is the Tokyo Bunka Kaikan, the most prominent work by architect Kunio Mayekawa (1905-1986), who apprenticed with Le Corbusier. “The audience seats in the Main Hall are peppered with four elementary colors of red, blue, green, and yellow. In the foyer, large columns stand here and there like trees, and the ceiling has randomly placed lights, making it look like a starry sky. The triangular tiles on the floor look like tree leaves,” explains Yoneyama. Mayekawa used geometric designs, which is a feature of modernist architecture, while also incorporating aspects of natural sceneries and accidental elements.

What sets Kunio Mayekawa apart from his mentor?

The tour group was also led the rooftop garden (not open to the public). Yoneyama explained that a rooftop garden “is one of the ‘Five Points of New Architecture’ as defined by Le Corbusier.”

“Mayekawa went against the trend of ‘Japonism’ and adamantly adhered to the style of modern architecture. However, the upper part of the Main Hall’s exterior looks a lot like the ridge of a roof on a traditional Japanese house. I believe he was actually incorporating some subtle Japanese expressions as well.”

Tokyo Bunka Kaikan Backstage Tours (Architecture) and (Stages) are given a few times a year on an irregular basis. Please check on Tokyo Bunka Kaikan’s official Twitter page for information.

The Japanese text was written by Emi Sato.

A membership system for colleges and other institutions, which encourages them to make good use of Tokyo’s municipal cultural facilities for providing education, thereby giving students the opportunity to learn about culture.
Membership comes with many benefits including invitations to members-only events such as the above-mentioned tour, as well as free entrance to permanent exhibitions and discounts for special exhibitions held at Tokyo’s metropolitan government-run museums.