A New Award for Mid-Career Artists in Japan 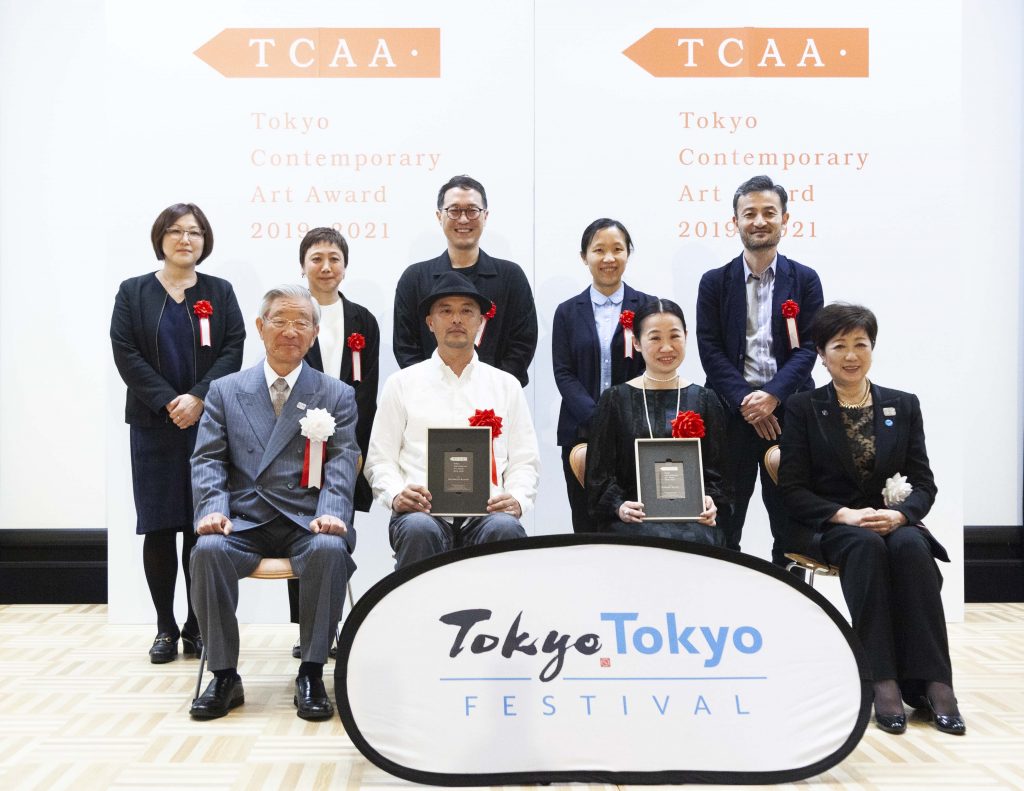 The winners of the 1st TCAA: Sachiko Kazama (front row, center, right), and Motoyuki Shitamichi (front row, center, left). *Tokyo Tokyo FESTIVAL is an initiative for the development of diverse cultural projects in the run-up to 2020 as the year of the Tokyo Olympics and Paralympics, designed to disseminate Tokyo’s artistic and cultural appeal.

TCAA was established as an award for mid-career artists active in Japan. A call for applications was issued in July and August of 2018, and seven artists were nominated from 136 applicants, including artists recommended by the International Selection Committee. The winners were determined through a process that included research on the nominated artists, studio visits, and interviews. The winners are awarded a cash prize of three million yen, as well as continuous support for a period of two year that includes support for overseas activities during the following year and an award exhibition to be held at the Museum of Contemporary Art Tokyo on the third year.

The winners of the 1st TCAA are Sachiko Kazama, who creates mainly black woodblock prints filled with ominous dark clouds looming over the future and whose work is based on thorough research of the past, and Motoyuki Shitamichi, an artist whose creative activities are grounded in travel and fieldwork.

The contrast between the two winners

Sachiko Kazama says that she became more conscious of the Nazi in the process of creating Dyslympics 2680, a woodblock print that combines two themes: the National Eugenics Act promulgated in 1940 and the planned Tokyo Olympics, which never took place. The artist shared that she would like to use the TCAA support for overseas activities to visit various places from her base in Berlin.

Motoyuki Shitamichi’s Tsunami Stone is a video work inspired by the Great East Japan Earthquake of 2011. Over a period of five years, the artist filmed the giant boulders deposited on the shores of the Sakishima Islands in Okinawa by a tsunami some 250 years ago. His work is currently part of the exhibition in the Japanese Pavilion at the 58th Venice Biennale that is held in Venice, Italy, from May 11 through November 24, 2019. According to Mr. Shitamichi, there are many mid-career artists who give up on their creative activities or get a job in other fields. Against this backdrop, his wish apparently is to go out into the world and fully immerse himself in creative work.