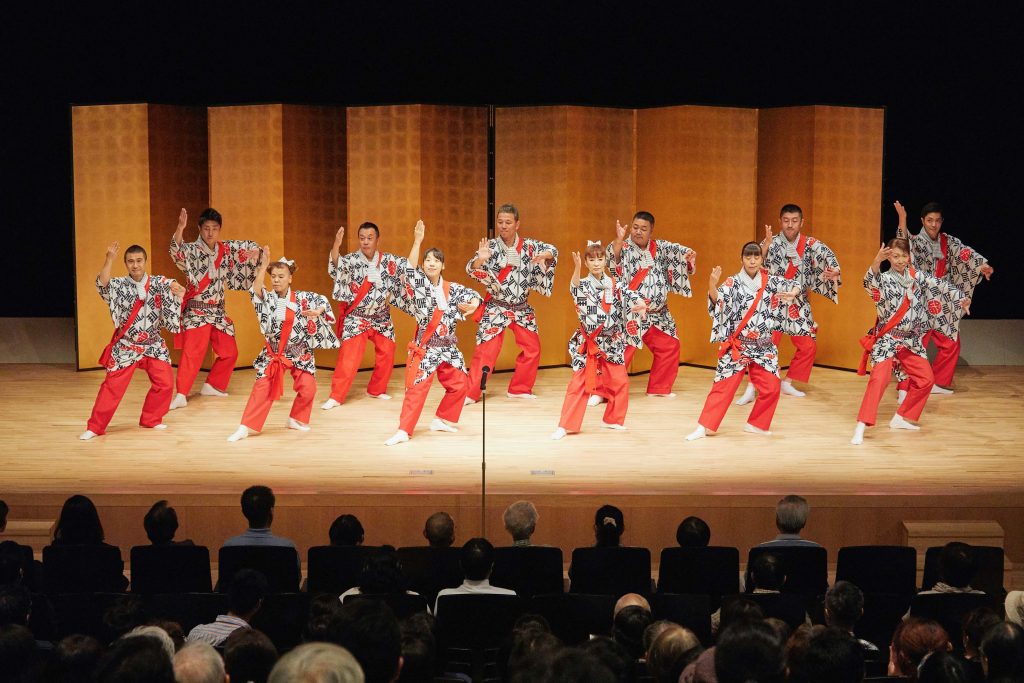 The Edo-Tokyo Museum, located in Tokyo’s Ryogoku, reopened in the summer of 2019 following the renovation its two performance halls. The halls have been redesigned to give all audiences, regardless of age, gender, or disability, the opportunity to enjoy traditional Japanese performing arts. To commemorate the reopening, the museum staged the Edohaku-Yose Special, an extra-special version of the Edo-Tokyo Museum Vaudeville regularly held in the museum’s Permanent Exhibition Room, in the renovated Large Hall. We were on hand to experience the inaugural performance, Rakugo and Noryo Sumiyoshi Odori.

The Large Hall, the largest hall in the museum, seats 369. As part of the renovation project, the hall’s gold-leafed folding byobu screen and other large stage props were restored. The auditorium itself has also been redone in a chic color palette to create a simple space suitable for an array of different performances. The last row of seats is now equipped with spaces for wheelchair users in locations from which the entire stage is readily visible. The diverse audience for the opening performance included wheelchair users, the visually impaired or blind, mothers with babies, and visitors from outside of Japan.

“Dodon, don, don, don!” The drumming of the large Japanese taiko drum signals that the curtain is about to rise and the vaudeville will begin. Sanyutei Tokin took the stage to the strains of shamisen, performing “Kohome,” the story of a careless man, as the opening act.

Next, Tachibanaya Kitsunosuke performed a zokkyoku folk song on shamisen. Tachibanaya is one of the very few people who keep the tradition of zokkyoku in the vaudevillian style alive in the world today.

These performances were followed by Sanyutei Kintoki’s rendition of the rakugo summertime classic “Okiku no Sara (Okiku’s Plates).” Based on a famous Japanese ghost story, this is a tale about the ghost of Okiku, a young maid framed for stealing a valuable plate, who appears from a well each night to count the plates. “One, two, three...” Live drums and shamisen swell to create an eerie atmosphere that perfectly complements the ghost’s haunting refrain, “Thou shalt be avenged!”

Following the rakugo and zokkyoku performances, the second act featured Kokontei Shinya and 13 other performers, taking turns to perform “Noryo Sumiyoshi Odori” (a humorous dance) accompanied by shamisen, taiko drum, and song. A feature of Japanese summer, the Noryo Sumiyoshi Odori seems to have originated with a Shinto ritual dance for rice planting at the Sumiyoshi Taisha Grand Shrine in Osaka. From the end of the Edo period through the early Meiji period, street performances of this dance were extremely popular in both Edo, and then Tokyo, and are even included in Utagawa Hiroshige’s Meisho Edo Hyakkei (One Hundred Famous Views of Edo) woodblock prints.

Sumiyoshi odori dance performances came to be featured in variety shows and then as parlor entertainment for more exclusive events, before finding a home as a popular draw for some 40 years at the Asakusa Engei Hall.

The Large Hall’s acoustics make for powerful performances of both live music and close-miked storytelling. As befits the inaugural show commemorating the hall’s reopening, this lively and spectacular one-hour performance was met with thunderous applause as the curtain fell.

Edo-Tokyo Museum curator Kaoru Matsui says, “We hope that both the Large Hall and the Small Hall will be used especially for performances of traditional performing arts.” The halls had not been open for use by the general public prior to the renovation.

Formerly called the Video Screening Hall as it was only used for video screenings and lectures, the Small Hall is now equipped with a stage and features the same acoustics and lighting as the Large Hall. The black, orange, and purple tricolor scheme is designed to make the audience feel as if they have been to a vaudeville theatre. The weekly events held in the Small Hall are currently planned and hosted by the museum.

In addition of these special shows, the museum has also scheduled three shows featuring performances of Edo and Tokyo performing arts in the Large Hall for 2019. These performances are included with a general admission ticket. The first, a show entitled Ukiyo-e and Japanese Music – Follow the Sumidagawa River, was held on September 15 in collaboration with the National Theatre of Japan. Pieces with Japanese harp, dances, traditional nagauta songs, and other music referencing the world of ukiyo-e were performed. In November, a concert associated with the Modern Tokyo section of the museum’s Permanent Exhibition Room, Popular Songs in Modern Tokyo, will be held. In January 2020, Tatekawa Shinoharu will perform rakugo in English, followed in March with a classical concert to commemorate the founding of the Edo-Tokyo Museum by the woodwind quintet of the New Japan Philharmonic, which is based at the neighboring Sumida Triphony Hall.