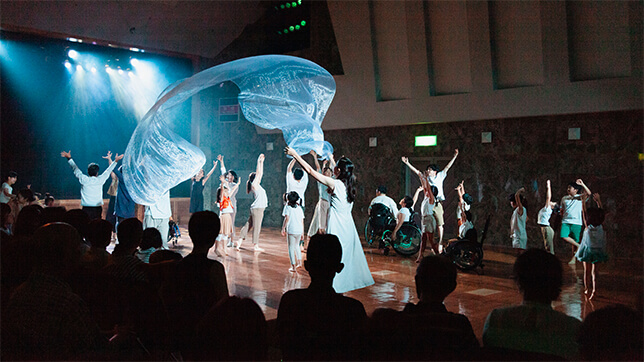 Ruri-iro no Chikyu (“bright blue earth”) performance in which everyone participates.

Mirai e no Manazashi (“gaze toward the future”) Performance was presented on September 15, 2019 by Inclusive Field for Dance at Ushigome Tansu Kumin Hall in Shinjuku City. Inclusive Field for Dance is a nonprofit organization that engages in creative expressions while respecting each other’s individuality regardless of age, gender, body size, or disability. It holds a regular twice-a-month activity centering around its members who engage in creative work and exchanges along with visitors and other experienced participants. The group also holds performances around Japan and abroad as well as workshops at various locations including educational institutions.

Be impressed by the speed of the wheelchair dancers!

As part of Mirai e no Manazashi Project commemorating the 20th anniversary of the organization’s founding, performed on this day were a dance routine by nine elementary school students created through a workshop that met three times, and a piece performed by all 30 of the regular members.

The audience sits at the same level as the stage, and the performers appear from behind the audience. As the facilitator calls out “Run!” “Look together with someone!” and “Draw a picture with your fingers!” the performers do various things like run and strike poses with great energy.

In the next act called Doki Doki Doki (meaning “heart-throbbing earthenware”), a dancer stands on a wheelchair holding a white ball while a few others push the wheelchair and move as they dance.

Up next is Te-awase Nohara, a piece that incorporates te-awase, a game in which partners place each other’s palms together and move as they feel the others’ movements. Members of the audience also participated on this day. Although they acted shy at first, as they moved while feeling the hands of those around them, their facial expressions and movements began to soften dramatically.

After the performance, we had a chance to talk with Hiroko Nishi, the director of the organization.

Te-awase is a technique for expression we have adopted since we began our activities and have cultivated over the years. When it is practiced numerous times, even developmentally challenged children who dislike being touched will begin to reach out with their own hands. We are seeing that as they interact with people in this way, they learn to feel more comfortable living in our society and it brings out their creativity.

She says the dances are generally not choreographed. “So that they express their individual selves, we facilitators call to them and connect with them as a way to sort of ‘cultivate their soil’.”

While people today talk about the importance of diversity and inclusion, Nishi feels that in reality, there are very few opportunities in which we can engage in activities on a truly equal footing with those with disabilities. In the future, she wants to create a foundation on which more and more of such activities can be generated.