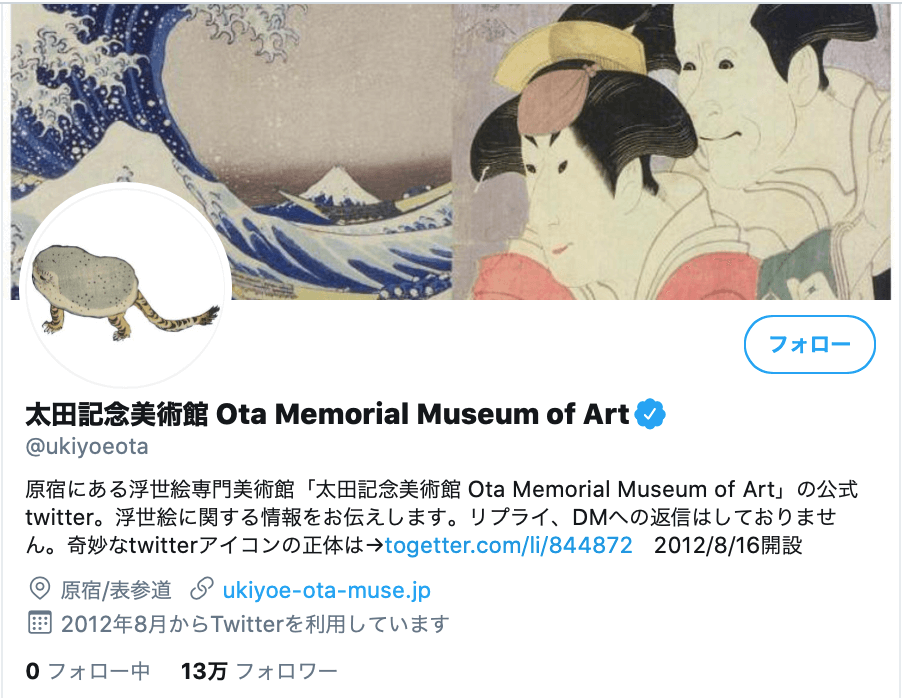 Located in the Harajuku-Omotesando area, the Ota Memorial Museum of Art is known for its extensive collection of ukiyo-e woodblock prints. The museum is popular with ukiyo-e lovers both in Japan and overseas, and now its official Twitter account is gaining ever more followers for its detailed explanations of the museum's pieces and introduction of prints featuring charming animals and adorable children. In 2020, the museum’s Twitter page gained a great deal of attention when it tweeted the Kanai anzen o mamoru Junishi no zu (Twelve Animals to Protect the Safety of the Home) （The production year unknown）, an amalgamation of the 12 signs of the Chinese zodiac, as a prayer for the end of the COVID-19 pandemic.

All of the museum’s curators’ tweet on the official Ota Memorial Museum of Art Twitter account adding their own flair to images of works featured in current exhibitions or pieces depicting seasonal themes. The hashtag ＃おうちで浮世絵 (#ukiyoeathome) was started to introduce Twitter followers to prints from the museum’s exhibition Kaburaki Kiokata and Hirezaki Eiho -- Illustrations Bringing Color to Modern Literature, after it was cancelled mid-exhibition when the museum temporarily closed to help stop the spread of the coronavirus. In addition to images of specific pieces, the museum also introduces display panels from the beginning of each section of the exhibit, allowing readers to follow the exhibition’s overall story and enjoy the meaning behind the pieces.

People in Japan have spent more time at home since March 1 2020, when elementary and junior high schools closed, prompting the museum to expand their content so that people can enjoy ukiyo-e at home. The museum posts images of talisman-like pieces such as half-human, half-fish mermaids like the Amabie, which became popular as a creature for warding off epidemics. Ota Memorial Museum of Art curator Kenji Hinohara says, “This is a times when it’s difficult to get out of the house and easy to starting feeling down, so we choose pieces to post that are fun to look at or soothing to the soul.”

Discoveries and Connections on Social Media

Ukiyo-e prints highlight details that can be difficult for modern viewers to uncover, such as Edo period customs and expositional texts. So museum curators add clear and interesting commentary and text to their tweets to draw our attention to these elements. Take a post originally tweeted by the Hiroshige Museum of Art in Tendo City, Yamagata Prefecture, and re-tweeted by the Ota Memorial Museum of Art. The commentary urges us to look closely at the pattern on the woman’s yukata, in which we find a bat with a scroll in its mouth and hands poised ninja-style, as well as one dressed in a headband in the iconic style of the kabuki character Sukeroku.

More than going viral, it is important that these tweets accurately and effectively convey the appeal of the artwork. This is why so much attention is paid to the accuracy of the accompanying text and the presentation of the images in the posts. Social media is a platform for casual and intimate communication, which perhaps lends itself to unexpected encounters and new discoveries. We will continue to keep an eye on the Ota Memorial Museum of Art and the multi-faceted ways the curators promote the charms of ukiyo-e.