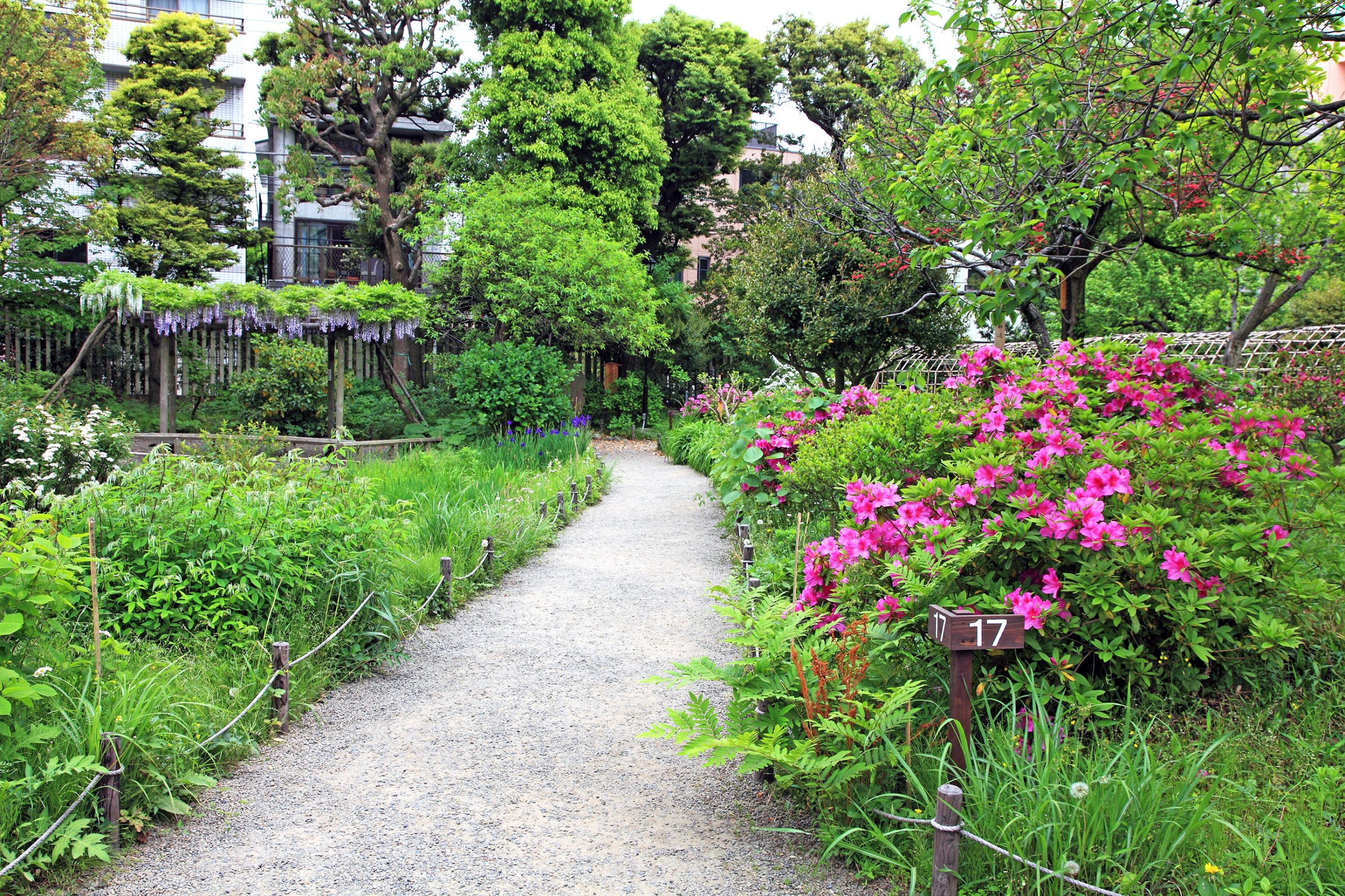 This is a series of visits to gardens in Tokyo featuring photographs by photographer Norihisa Kushibiki and commentary by Miho Tanaka, curator at the Edo-Tokyo Museum. Rather than daimyo gardens (those commissioned by daimyo feudal lords), which we introduced in this column in the past, Mukojima-Hyakkaen Gardens was created by a merchant and several literati in Edo (today’s Tokyo). The 10,885 square meters garden, lush with wild flowers and grasses, was filled with as much to see as a large-scale garden and with the passion of the people involved.

Mukojima-Hyakkaen Gardens, designated as a place of national scenic beauty and historic site, was opened by Sahara Kikuu, an antique dealer during the Bunka and Bunsei periods of the Edo Period (1603-1868). After serving at a teahouse in a Kabuki theater, he began selling tea utensils while tea ceremony culture spread to the general public. However, he was blamed by the magistrate for trading antiques at high prices and ended up living a quiet lift from his 40s.

This predicament was rescued by Edo literati such as the poet Ota Nampo painters Tani Buncho and Sakai Hoitsu. Kikuu met leading cultural figures who came to see kabuki performances at a teahouse. Through haikai literature, he established friendships based on equality that transcended status. They donated 360 plum trees to Kikuu’s garden so that he could make a living by selling the fruit to flower viewers.

A cultural garden decorated with wildflowers and stone monuments

Afterward, Kikuu and the literati continued to plant seasonal plants that appeared in waka and haiku poems so that Mukojima-Hyakkaen Gardens could be enjoyed throughout the year.

Hagi lespedeza is one of the garden’s specialties. Hagi is the most frequently mentioned flower in Manyoshu (The Anthology of Myriad Leaves), with 141 poems, and is a representative autumn flower in Japan, appearing in numerous classics such as The Tale of Genji and The Pillow Book. Around the end of September each year, a tunnel of red and white lespedeza bloom for a length of approximately 30 meters, delighting the eyes of visitors.

In addition to lespedeza, other plants appeared in Manyoshu. They included kudzu and wisteria that make fine trellises, irises, and omoigusa, a small flower about 10 cm long that grows at the base of silver grass and other plants. Konjac is also grown here, in reference to Matsuo Basho’s haiku, “Koniyaku no sashimi mo sukoshi ume no hana” (lit. a bit of sashimi konjac and flower of plum). Currently, the garden is home to approximately 500 species of plants, 80 percent of which are grasses and trees, mainly native to Japan.

In addition, Kikuu planted a collection of the seven flowers of spring, summer, and the new autumn season, which he chose himself, to create a spot where visitors can feel the flavor of each season. The seven autumnal flowers, in particular, are a collection of flowers that bloom from summer to autumn, from early morning to midday, evening, and night, creating the effect of a flower clock that tells the time by the flowers.

Furthermore, baskets of the seven spring herbs that originated in Mukojima-Hyakkaen are presented to Japan’s Imperial Family each spring.

Mukojima-Hyakkaen is home to four varieties of the seven flowers of spring, summer, and autumn, as well as Kikuu’s selection of autumn flowers.

The history of Mukojima-Hyakkaen can also be seen through stone monuments placed around the pond and in other locations in the garden. Twenty-nine stone monuments erected between the time of the garden’s founding and the Meiji Era (1868-1912) range from those that tell the story of Mukojima-Hyakkaen’s origins, to a monument to a Buddhist painting by Okubo Shibutsu, a Chinese poet with whom Kikuu interacted, a monument to a haiku by Basho, and a memorial to kabuki playwright Kawatake Shinshichi I.

Toru Abe, manager of Mukojima-Hyakkaen Service Center, hopes to “continue introducing the horticulture of the Mukojima area, which has continued since the Edo Period.” He has been studying Gunpo-reki, a flower calendar written by Kikuu, as a guide, and is trying to create Mukojima-Hyakkaen as a unique garden by reproducing scenes from the Summer and Autumn Grasses painting on byobu folding screens by Sakai Hoitsu, an artist with whom Kikuu was particularly close. (The painting is in the Tokyo National Museum collection.)

Inheriting the horticulture of Mukojima

“People in the Edo Period came here by boat from the Sumida River to enjoy cherry blossom viewing and visit the seven gods of good fortune. Mukojima-Hyakkaen was a base for sightseeing along the Sumida River.”

Shigemoto Sahara, who operates the Satei Sahara tea house in the garden, explained. He is an eighth-generation descendent of Kikuu. “Crossing the Azuma-bashi bridge, you can see fields of rice paddies and flower gardens. It is also written in Meiji Era literature that tea was served to flower-viewing visitors at Shobu-en (Iris Garden) in Horikiri and Peony Garden in Kinshicho. At Mukojima-Hyakkaen, in addition to flower viewing, people would make Sumidagawa-yaki pottery in the garden’s kiln and drink sake with umeboshi pickled plums at the teahouse while waiting for the pottery to be finished. That was a course of enjoyment.”

“The seven gods of good fortune tour was started at the suggestion of Ota Nanpo, who thought it would be a good idea because our garden has a statue of Fukurokuju, since there were few flowers in winter and snow viewing was not possible. The tour is as old as Yanaka and Yamate.”

Since that time, many seasonal events have been held, including a tour of the seven gods of good fortune, viewing of morning glories and chrysanthemums, moon-viewing parties, and insect-listening parties. Today, in cooperation with local gardening enthusiasts and haiku poets, the garden continues to focus on such events.

“Some say that Edo is full of country people. I think everyone must have felt nostalgic and at ease in this garden, which resembles the fields and mountains of their hometowns. My mother used to call this place ‘the garden of kinobashi’ (relaxation), and it is said that Nogi Maresuke, an army general during the Meiji Era, often visited and gazed at the garden while doing nothing else,” Mr. Sahara told us.

Although a private garden, Mukojima-Hyakkaen was visited by the shogun of the time and the Showa Emperor. It was flooded by 2 to 3 meters of water from the Sumida River in 1910. Following financial difficulties, the land and building ownership were moved to the Ogura family business concern, and then donated to the city of Tokyo in 1938. Furthermore, during the Tokyo Air Raid of 1945, the building was destroyed by fire and the plants burnt down, leaving two ginkgo trees and a tabunoki Berberis thunbergia tree.

However, thanks to the efforts of local volunteers, the garden was restored and reopened four years later. The plum grove was restored with the help of trees that had been slated for removal on Ome Kaido avenue for an expansion project. Today, Shirokaga, which are used for plum wine and umeboshi pickles, and fragrant Hanakami plums herald the arrival of spring in Mukojima.

Daimyo gardens introduced earlier in this series are modeled after scenic spots in Japan and China, with universal landscapes of undulating terrain, large fountains, and rocks following formal patterns. There is an unchanging and stylistic beauty along with seasonal scenes. In the past, the garden was a place where feudal lords entertained their guests. Some gardens were opened to the public after the owner became the city of Tokyo in Showa Era (1926-1989).

Mukojima-Hyakkaen, on the other hand, is a flat landscaped garden with satoyama and wild landscapes. Its most attractive feature is the beauty of changes that occur with the seasons. The garden, of a merchant, has been widely enjoyed since its opening as a place for literati, poets, sho calligraphers, and painters, as well as commoners to gather and enjoy themselves. This is still the case today.

“Even today, some visitors come to the garden every week, and the neighborhood haiku teacher comes once a month to look at the garden from the same spot. They say the air and scent change with the seasons,” said Mr. Sahara.

Mukojima-Hyakkaen is loved by many people as if it were their own garden—even after the passage of 200 years.

Photographer. Born in Hirosaki City, Aomori Prefecture. Active mainly in the fields of advertising and editorial work. Provides portrait photography for numerous celebrities and prominent figures. Took private photos of Giorgio Armani and Gianni Versace. His work as an official photographer of the nine Tokyo metropolitan gardens inspired him to continue taking photos of traditional Japanese-style gardens as his life’s work.

Curator at Edo-Tokyo Museum. Provides explanations of historical materials and delivers lectures on the theme of the relationship between people and flora, and specifically the art of gardening, during the Edo period. Tanaka conducts a course “Traditional Japanese Gardens x Area Guide,” which explores the history of classical gardens in Tokyo from the perspective of local characteristics.