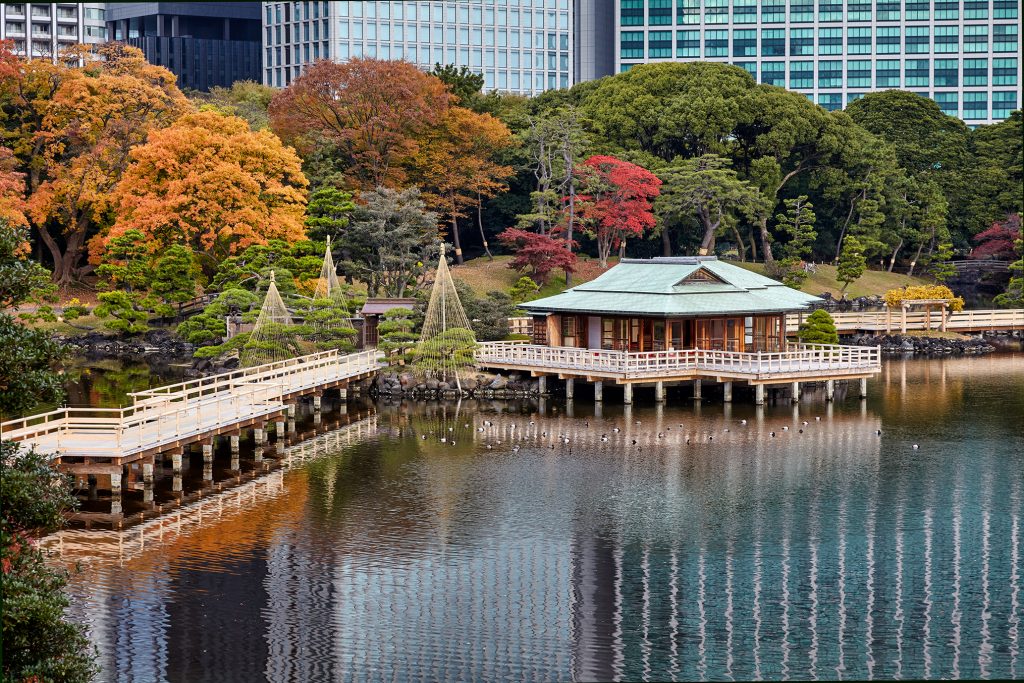 The Nakajima Tea House is the main structure in Hamarikyu Gardens. This urban oasis is a favorite resting place for many water birds.

In Tokyo, there are several traditional Japanese-style gardens that are designated as cultural heritage sites. Although geographically located in downtown Tokyo, these gardens are an oasis of calm amidst the urban hustle and bustle, and provide a refined space to savor Japanese culture. This series of articles presents their changing beauty through the seasons as captured by photographer Norihisa Kushibiki, and explores their historical background and main attractions through the commentary of Edo-Tokyo Museum curator Miho Tanaka.

Traditional Japanese-style gardens are places where visitors can get acquainted with Japanese aesthetic values and immerse themselves in the diverse beauty of the four seasons. Tokyo Art Navigation begins a new series of articles that delve deeply into the historical transformations and allure of traditional landscape gardens in Tokyo, and feature commentaries from Miho Tanaka, a curator at Edo-Tokyo Museum and photographs of gardens in all four seasons by photographer Norihisa Kushibiki. The first installment of the series presents Hamarikyu Gardens.

The unique role of Hamarikyu as a national treasure

The green area across from the high-rise buildings and the expressway is Hamarikyu Gardens. It is often called “a National Treasure of the Garden World.”

A typical daimyo garden built by a feudal lord (daimyo) at his estate is designed as a stroll-type garden that combines flat areas and miniature hills arranged around a pond. Hamarikyu, on the other hand, has two components—a stroll garden with a pond on the south side and a vast lawn on the north side—and boasts an expansive territory of 250,215㎡.

Another unique feature of the garden is Shioiri Pond, which draws in sea water from Tokyo Bay. The unique waterfront location of Hamarikyu creates a stunning scenery.

A welcoming place for cultural entertainment and martial arts

The land where Hamarikyu is located was first reclaimed during the Edo period (1603-1868). Initially, it was used mainly as a ground for falconry, a favorite pastime of the first Tokugawa shogun Ieyasu. Full-fledged landscaping and development work began under the sixth shogun Ienobu.

The shogun who most often visited Hama Goten (“Beach Palace”), as the estate was named, was the eleventh shogun Ienari. According to historical records, he visited it 248 times during his 50 years as shogun. The Nakajima Tea House, Matsu Teahouse, Tsubame Teahouse, and Taka Teahouse were built during his time.

In the final years of the Edo period, anxiety over foreign policy matters prompted the shogun to build, as waterfront castle outposts, several fortifications at Hama Goten, including a coastal artillery. After the Meiji Restoration, Hama Goten, which belonged to the shogun, was granted to the Imperial Family and renamed “Hamarikyu.”

As Hama Goten and then Hamarikyu, the role of the garden changed through the ages, but it was not modified in any significant way. Natural disasters and wars, however, left their mark on the estate. After surviving numerous crises, such as the 1923 Great Kanto Earthquake and the 1944 air raids during the World War II, in 1945 Hamarikyu was bequeathed by the Imperial Family to the City of Tokyo, and later opened to the public as Hamarikyu Gardens.

Maintenance adapted to the modern times and utilization of cultural resources

Today, a diverse range of activities are being implemented at Hamarikyu in order to protect the scenery and historic landmarks of the garden while ensuring its efficient utilization. These activities include high-quality maintenance provided by certified horticulture technicians and proactive utilization of historical sources in the garden. Information on the attractions of Hamarikyu is presented and disseminated, in English as well, on Teien Guide (a website dedicated to traditional Japanese-style gardens) and Twitter.

Hamarikyu Gardens as we see them today are a work of art created over a period of several hundred years. This work of art is not simply preserved while maintaining its refined elegance, but is also skillfully utilized in a manner tailored to the modern times. This is precisely why people understand its appeal and importance as a beloved part of their daily life.

Norihisa Kushibiki
Photographer. Born in Hirosaki City, Aomori Prefecture. Active mainly in the fields of advertising and editorial work. Provides portrait photography for numerous celebrities and prominent figures. Took private photos of Giorgio Armani and Gianni Versace. His work as an official photographer of the nine Tokyo metropolitan gardens inspired him to continue taking photos of traditional Japanese-style gardens as his life’s work.

Miho Tanaka
Curator at Edo-Tokyo Museum. Provides explanations of historical materials and delivers lectures on the theme of the relationship between people and flora, and specifically the art of gardening, during the Edo period. Tanaka conducts a course “Traditional Japanese Gardens x Area Guide,” which explores the history of classical gardens in Tokyo from the perspective of local characterstics. For details on Miho Tanaka’s lectures and courses, check the official website of Edo-Tokyo Museum:
https://www.edo-tokyo-museum.or.jp/en/event/culture/