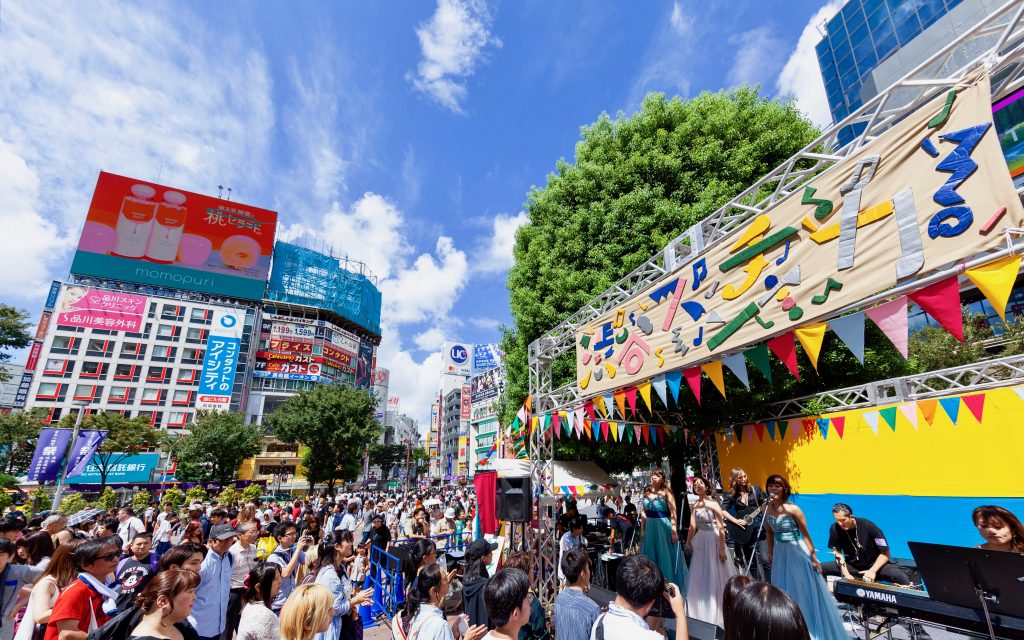 Opening collaboration live show “Kaimaku Korabo LIVE!” was held on one of the main stages at the plaza of theHachiko statue. Many collaborative musical performances were held, including a song by a duo playing acousticguitar and the cajón (percussion instrument) with four classical singers, and one by a brother-and-sister jazzunit and a hip-hop group.

Shibuya is known around the world as a center of fashion and culture. For the second edition of the “Next Tokyo Discovery Squad!” we will report on the “machinaka” (in the city) music event Shibuya Zunchaka! 2018. It was held on Sunday September 9, 2018 at 27 locations including street corners near Shibuya and Harajuku stations, attracting crowds of tourists and shoppers.

Opening collaboration live show “Kaimaku Korabo LIVE!” was held on one of the main stages at the plaza of the Hachiko statue. Many collaborative musical performances were held, including a song by a duo playing acoustic guitar and the cajón (percussion instrument) with four classical singers, and one by a brother-and-sister jazz unit and a hip-hop group.

Shibuya Zunchaka! was launched in 2013 as a collaboration project among the Shibuya City, shop associations surrounding the Shibuya Station, and the Otomachi® (Ongaku no Machizukuri) Project of Yamaha Music Japan Co., Ltd. Today, it is jointly run by Team Zunchaka! comprised of local volunteers, the shop associations, and Yamaha’s Otomachi. For this year, which the fourth event, performances were put on by 114 groups of artists who were selected from the public through an application process.
“The Tokyo Metropolitan Government generally prohibits street performances but once a year, we transform Shibuya into a ‘musical freedom zone’!” says Masayuki Hiraide, a co-captain of “Team Zunchaka! 2018.”
“It is an event that welcomes everyone to participate and enjoy music, regardless of what genre or how well you play. We want to go beyond generations, nationalities, ethnicities, and genders to include all cultures and keep alive what Shibuya is all about,” stated Shoichiro Tashiro, the other co-captain.

All performers, staff members, and audience members are stars here

In 2018, Shibuya Zunchaka! is expanding to places like Ebisu and Hatagaya to cover almost the entire ward. Workshops were also offered at each site.
On Cat Street (former Shibuya River Promenade), street musical performers sang musical numbers as they danced and proceeded down the street.
In the closing event “Zunchaka! Finale♪”, the host band made up of volunteer “Team Zunchaka! 2018!” members took the lead as performers and members of the audience all performed together.

It was an event that successfully communicated the goal to bring vitality to Shibuya by interacting through music and bringing everyone into the spotlight.

*This project is part of the 2018 “Tokyo Tokyo FESTIVAL” Grant Program: Support for Citizen-led Cultural Activities.