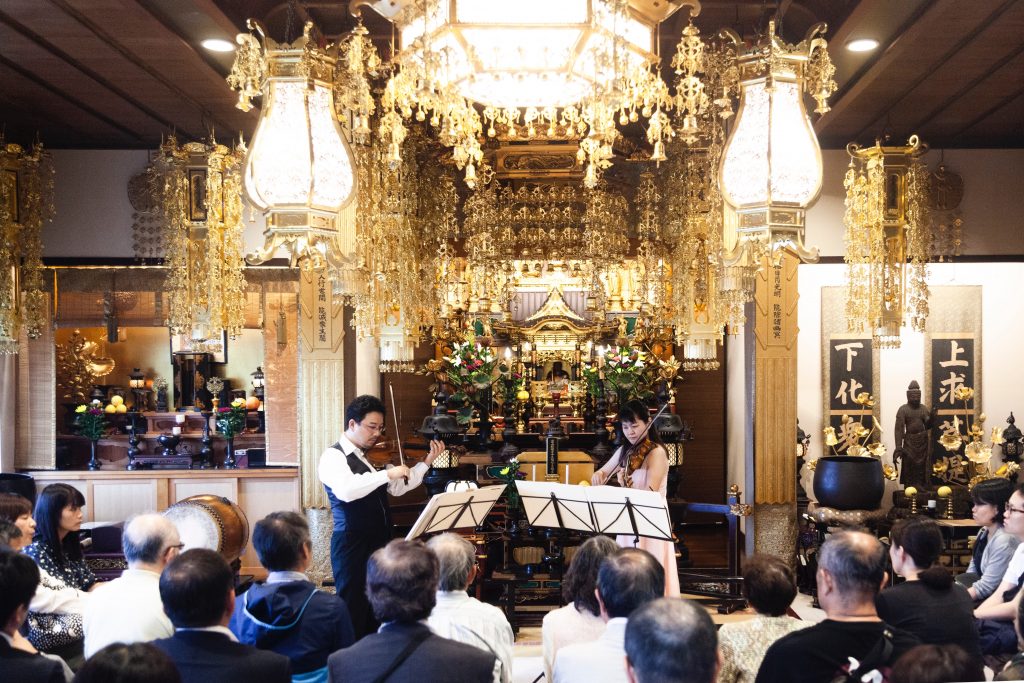 Minami-Senju, a colorful bustling neighborhood, features a mix of traditional buildings and renewed apartment blocks along alleys bursting with old town charm. Again this year, daily life in the neighborhood was transformed into the extraordinary with the eighth annual Minami-Senju Old Town Tour & Music Festival. For this column, we spoke with NPO Senju Sumidagawa, the non-profit that sponsors the music festival.

On October 8, 2018, the Minami-Senju Old Town Tour & Music Festival was held at five locations in the old town area on the northwestern side of Minami-Senju area. This event gives festivalgoers the opportunity to walk the neighborhood, appreciating five different musical performances in an old town setting. The theme of this year’s festival focused on Vienna, which is a sister city of Arakawa City.
Shigemitsu Ebie is a representative of NPO Senju Sumidagawa, the non-profit organization that sponsors the music festival each year. Ebie was born and raised in Minami-Senju and operates a barber shop on the shopping street here.

“Customers have told me, ‘After the performances, I look at the neighborhood differently,’” said Ebie.
Experiencing classical and contemporary music may just make even the most familiar landscapes seem extraordinary.

Oboist Kayoko Watanabe has served as director for the Minami-Senju Old Town Tour & Music Festival since its inception.
With a sense of concern that development was threatening the closeness of the community and the friendliness between people, Watanabe organized a music festival in 2008 in the buildings in Sumida City where she lives. It was there that members of the non-profit NPO Senju Sumidagawa met and decided to start a music festival in Minami-Senju, as well.
Attracting larger crowds each year, the festival is now organized and managed by a group of local volunteers and staff from the local credit bank.
The great appeal of this music festival is the chance for everyone—from couples with a five-year old kid to the elderly who find it difficult to get out of the house—to hear first-class performances in a casual setting.
In addition to the great music, the festival offers the special Minami-Senju charm found in wandering down the narrow alleyways, past flower-lined houses and shops, greeting passersby.