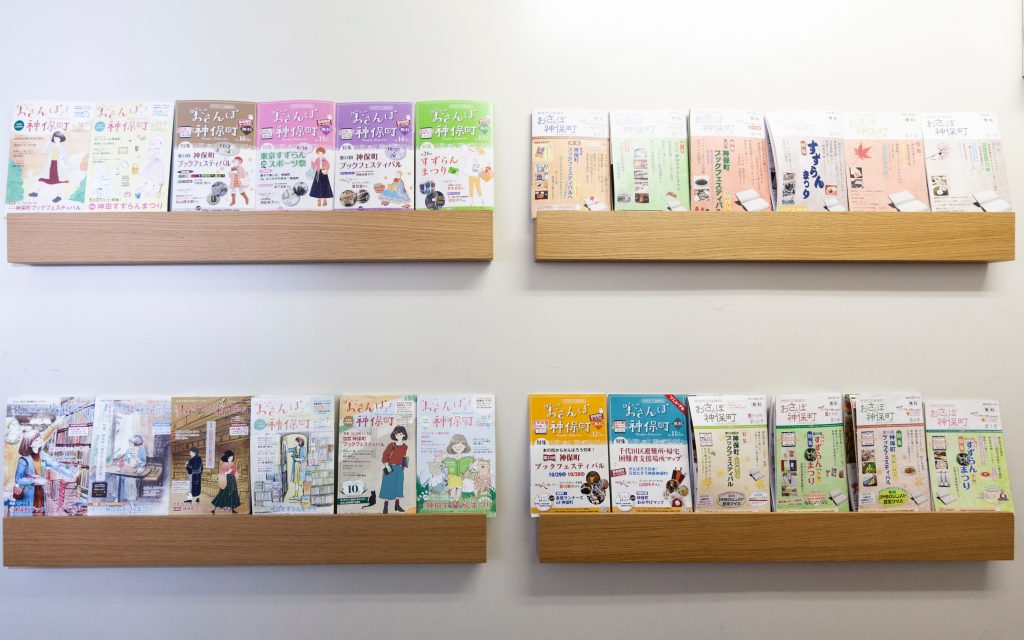 Launched in 2006, the free magazine Osanpo Jimbocho boasts a circulation of 40,000 copies per issue, with 26 issues published to date. Content includes interviews with antiquarian bookshop owners and columns featuring places to dine or drink locally as well as themed walks exploring local curry houses, literary figures, architecture and more. With paid advertising covering production costs, the staff of about 15 people is all-volunteer. We spoke with chief editor Keiko Ishikawa.

A start supported by local enthusiasm

The Kanda Suzuran Festival celebrated every May provided the impetus for Keiko Ishikawa’s launch of the magazine. The festival was originally started to enliven the redeveloping district of Jimbocho, with bookshops and restaurants along the Kanda Suzuran Shopping Street and local volunteers serving as the main organizers. Due to the aging of the organizers and other participants, however, there was even talk of discontinuing the event. Ishikawa then proposed launching a free magazine in the hope of building a community around people involved with the festival.
I struggled with the editing process as a first-time publisher but managed to launch the first issue with the help of advice from locals. Over the 13 years since, I have continued to put my heart and soul into publishing the magazine, walking the streets of Jimbocho and gazing at the faces of people in the community.

There was also a time about seven years after the launch when pregnancy prompted Ishikawa to ask herself, “Is it time to quit?” The messages of encouragement she then received from the Shopping Street community made her realize that the magazine was not only something she wanted to involve herself with, but also something the local community relied on.
With a production team made up of students, housewives, full-time office workers and others handling tasks like editing, marketing and map-making, and the copyright page of each issue includes the message, “Thank you to everyone involved in producing this magazine!” Osanpo Jimbocho was borne of a love for the community and has been nurtured by that community. Seeking inspiration for the next issue, Ishikawa will continue with her walks through Jimbocho.