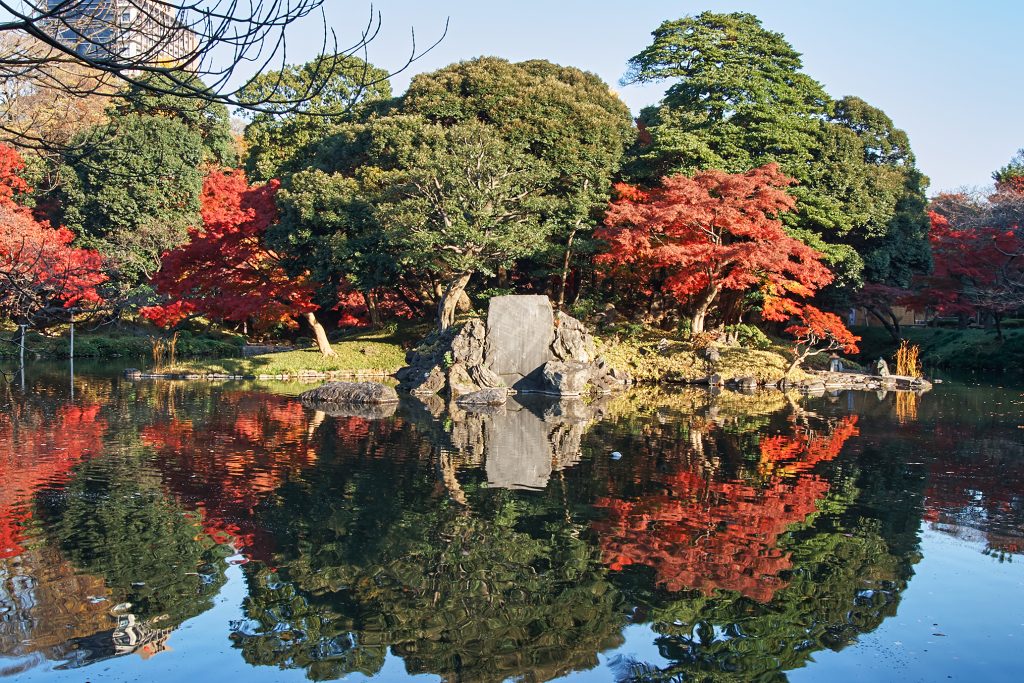 This is the third in a series of visits to gardens in Tokyo featuring photographs by photographer Norihisa Kushibiki and commentary by Miho Tanaka, curator at the Edo-Tokyo Museum. This installment features a visit to Koishikawa Korakuen, gardens belonging to members of the Mito Tokugawa family who were close to the Shogunate, located next to Tokyo Dome.

Koishikawa Korakuen is a designated special place of scenic beauty and special historic site. Begun by Tokugawa Yorifusa, founder of the Mito clan, the garden was originally part of the family’s nakayashiki, a home for family heirs or retired daimyo. Koishikawa Korakuen is built in the chisenkaiyushiki style with a garden path encircling a central pond, and the scenery changes rapidly as visitors walk the path.

The gardens were completed by the second feudal lord of the Mito clan, Mitsukuni, who invited the Confucian scholar Zhu Zhiyu to incorporate Chinese elements into the landscaping.

Growing with the Koishikawa Arsenal

After the fall of the Edo Shogunate in 1867, the Koishikawa Korakuen gardens and residence were placed under the jurisdiction of the new Japanese government, which built the Koishikawa Arsenal on the land. Although a plan was proposed to destroy the entire garden to expand the arsenal’s facilities, the idea was opposed by Yamagata Aritomo and abandoned. The garden and residence subsequently became an important landmark for entertaining special guests from both Japan and abroad.

In 1923, the garden was designated a special place of scenic beauty and special historic site. After this, however, the garden and its structures, including the Kiyomizu Kannon-do, were lost when the Great Kanto Earthquake struck. In 1936, Koishikawa Korakuen was placed under the jurisdiction of the Ministry of Education, and Korakuen Stadium replaced the Koishikawa Arsenal the following year. The garden was opened to the public in 1938.

Today, measures are being taken to preserve the beauty of the garden for future generations. The first step has been restoring the structures that were destroyed. The Shiraito waterfall located at the back of Daisensui pond was restored in 2020, ten years after the survey began. Traditional civil engineering techniques were brought back for the reconstruction, including gabion baskets made of bamboo and filled with stones to hold the banks of fast-flowing rivers. Koishikawa Korakuen is the only Tokyo metropolitan garden where gabion are used.

The rice fields established by Mitsukuni are now used as communal gardening space. Each year, elementary school students from the neighborhood plant sticky rice seedlings, erect scarecrows, and harvest the rice under the guidance of garden staff. Mitsukuni also loved plum trees, so much so that he himself took the pseudonym Bairi, meaning plum village. Home to some 90 trees of more than 35 plum varieties, the gardens host a plum blossom festival in February when the blossoms are at their peak.

Over some 400 years since the garden was first built, Koishikawa Korakuen has faced many challenges. Yet visitors are still fascinated by the rich and varied landscape highlighting differences in elevation and the ideas of the Mito Tokugawa feudal lords scattered throughout the grounds.

Over some 400 years since the garden was first built, Koishikawa Korakuen has faced many challenges. Yet visitors are still fascinated by the rich and varied landscape highlighting differences in elevation and the ideas of the Mito Tokugawa feudal lords scattered throughout the grounds.

Norihisa Kushibiki
Photographer. Born in Hirosaki City, Aomori Prefecture. Active mainly in the fields of advertising and editorial work. Provides portrait photography for numerous celebrities and prominent figures. Took private photos of Giorgio Armani and Gianni Versace. His work as an official photographer of the nine Tokyo metropolitan gardens inspired him to continue taking photos of traditional Japanese-style gardens as his life’s work.

Miho Tanaka
Curator at Edo-Tokyo Museum. Provides explanations of historical materials and delivers lectures on the theme of the relationship between people and flora, and specifically the art of gardening, during the Edo period. Tanaka conducts a course “Traditional Japanese Gardens x Area Guide,” which explores the history of classical gardens in Tokyo from the perspective of local characterstics. For details on Miho Tanaka’s lectures and courses, check the official website of Edo-Tokyo Museum:
https://www.edo-tokyo-museum.or.jp/en/event/culture/