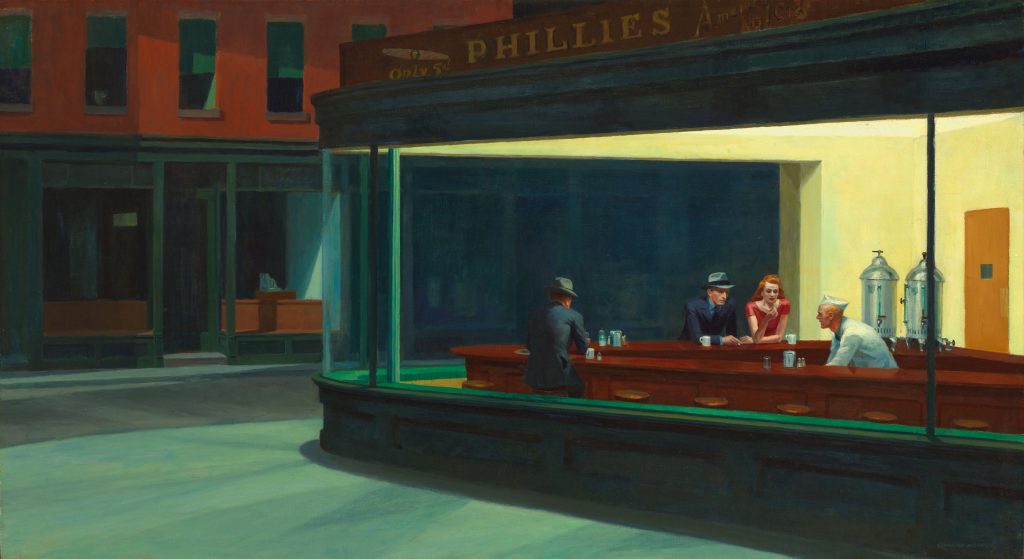 This series of articles presents art museums around the world that offer free online access to public domain works (intellectual property not protected by copyright) in their collections. In this fifth installment, we feature works from the collection of the Art Institute of Chicago, a leading art museum in the U.S. ranking alongside The Metropolitan Museum of Art and the Museum of Fine Arts, Boston. The Art Institute of Chicago collection of over 300,000 works of art encompasses a vast range of art from around the world, dating from ancient times to the present. Masayuki Tanaka, director general of The National Museum of Western Art, introduces a few American contemporary art masterpieces from this vast collection.

Nighthawks depicts a late-night diner in New York and the people inside. The striking intensity of the artificial lights glowing against the darkness of the street is a familiar sight in large cities. The stark contrast between light and dark give the scene a sense of loneliness and anxiousness. A solitary customer eats a lonely meal, while the couple sits with hands just barely touching, suggesting a mix of mutual desire and hesitancy.

Influenced by the trend toward medieval gothic architecture in 19th century England with its pointed windows below the roof, this style of house came to be popular in rural America. Wood called this American Gothic, seeing it as a symbol of the honesty and perseverance of the American farmer. The man and woman, seemingly a farming couple standing in front of their house, are in fact not husband and wife at all. Neither is their clothing from the 1930s when the work was painted, but rather 19th century fashion. Here, Wood creates a nostalgic depiction of a rural landscape of his imagination.

From the mid-1910s, many Blacks fled the racist South and migrated to the North. The Black population in Chicago grew dramatically, and African-American popular culture blossomed in suburbs like Bronzeville. This painting depicts a cabaret in the area. With the clock above the shelves of liquor bottles reading nearly 1am, the crowd is still dancing to the jazz playing on the jukebox at this late hour. The painter, Archibald Motley, Jr., was himself a Black American and is known for his depictions of Black American life in the big city during the Harlem Renaissance.

The museum collection boasts a vast range of Western paintings, sculptures, and photographs, as well as Chinese ceramics and Japanese ukiyo-e prints.