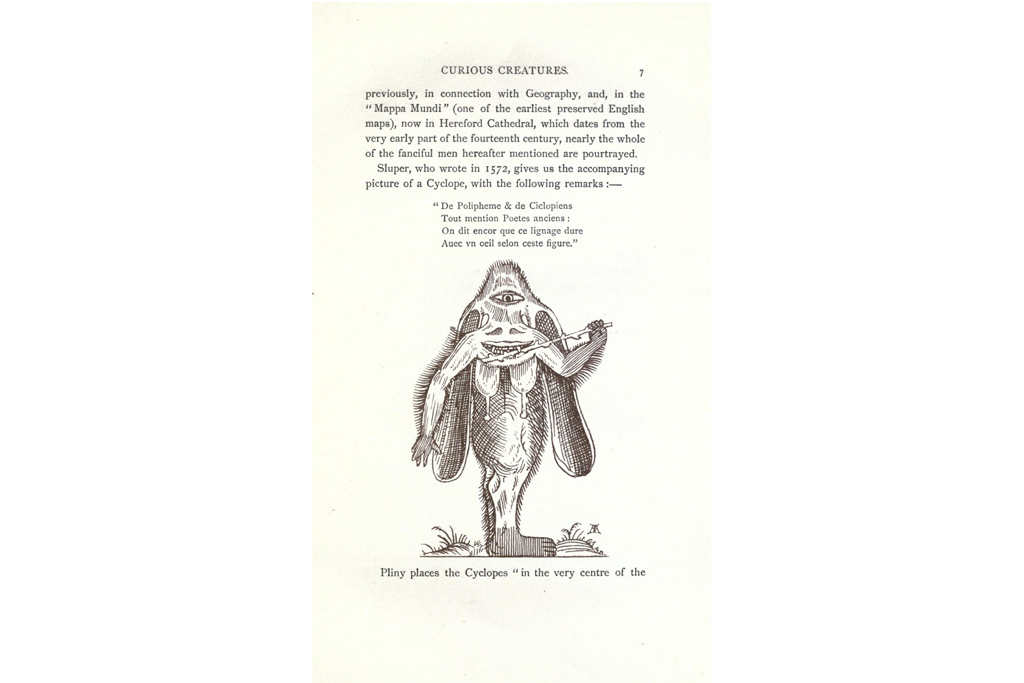 This series of articles presents art museums around the world that offer free online access to public domain works (intellectual property not protected by copyright) in their collections. In this fourth installment, we feature the world’s largest project to digitize writings on biodiversity, the Biodiversity Heritage Library (BHL), a consortium of museums, libraries, and research institutions. Established in 2007, BHL currently provides online access to hundreds of thousands of books and over 58 million pages of documents. We spoke with Yukio Amano, sculptor of ghosts, ghouls and goblins, who explains the iconography of mythological creatures from around the world known since antiquity.

Published in 1890, Curious Creatures in Zoology by John Ashton documents creatures depicted in ancient writings. The Cyclops, a race of giants in Greek mythology, are monstrous creatures much like the supernatural yokai in Japanese folklore. These were one-eyed gods of iron forging. Japanese mythology also has a god of blacksmiths, Amenomahitotsu no Kami. Blacksmiths would close one eye to get a close look at the hot molten steel, and they also had to continuously pump the bellows with their foot. This would sometimes damage an eye or leg and is said to be why gods and monsters associated with iron are depicted with one eye or one leg.

This is a representation of the bishop-fish (sea bishop) introduced in the zoology of the 16th century Swiss naturalist Conrad Gesner. The bishop-fish is thought to have been discovered off the coast of Poland in 1531, and squid and seals have been suggested as possible candidates for its true identity. Ashton offers the interpretation of poets of the time that “the sea, bestowed by the grace of God, contains the counterparts of everything on land and is home to bishops and monks, as well.”

The Kinmo zui is an encyclopedia created in the Edo period (1603-1868) containing a pantheon of creatures both real, such as tigers and elephants, and mythical. Kaichi is the Japanese name for a creature that looks something like a lion with a single horn on its head. This creature was said to appear wherever there was conflict between people, discerning which party was in the right and which was in the wrong and killing the unreasonable party with its horn. As a mythical creature that protects the law, the kaichi is sometimes used in China and Taiwan on ornaments and emblems for officers of the law. When this mythological creature was introduced to Korea, it lost its horn and took on more leonine features.

Biodiversity Heritage Library
Also serving as an online library, BHL posts more than 220,000 images of living creatures to its flickr account. These images are used for research, as well as increasingly often in the fields of art and design.
https://www.biodiversitylibrary.org/
https://www.flickr.com/photos/biodivlibrary/ *Access public domain images on the library's official flickr page at left.