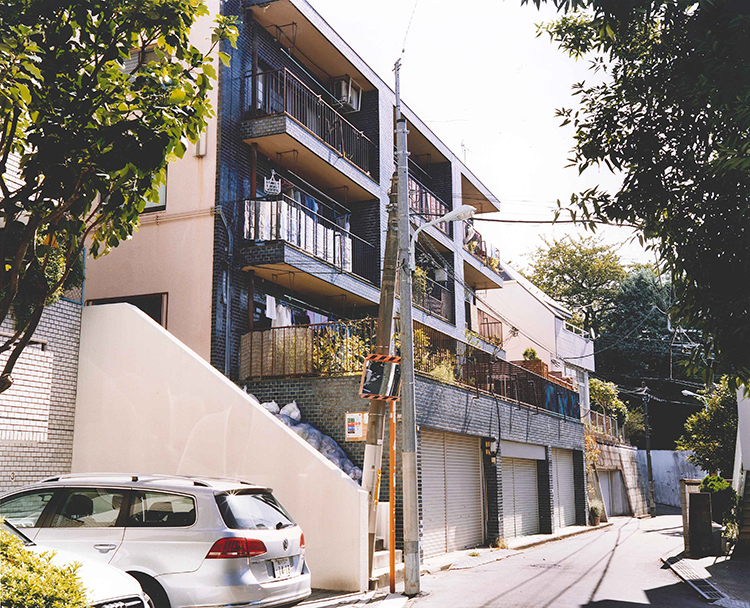 Hatsudai is at the edge of the Musashino Plateau about 1 kilometer west of Shinjuku. Among different theories of the origin of its name is that around 1591 there was the retreat for “Hatsudai no Otsubone (a court lady),” who was the foster mother of the second Tokugawa Shogun, Hidetada. It used to be a farming village with vast farms and wooded areas, but housing land development in the modern era, especially the opening of the Keio New Line, has led to the acceleration of the population. It is now considered as a popular, quiet, residential area within walking distance to Shinjuku. The west exit of Hatsudai Station of the Keio New Line is connected to Tokyo Opera City, a compound facility of 54 floors above ground and four floors underground, where the New National Theater is located. If you take the east exit, you will see commercial avenues with lots of family-run shops, and can feel an old downtown atmosphere. Naoki Ishikawa lived on the eastside of the station until he was 3 years old. We’ll explore the area as it is decades later.

If you get out of the south exit of Shinjuku Station and walk straight to the west on Koushu-kaido Road, Hatsudai is a mere one kilometer away. That is the town where I was born and raised until I was three. It was before my little brother was born and I was with my parents. I found out that the apartment building we used to live in is still there and decided to go see it. I also went to my grandfather’s house, which was across from the apartment. When I arrived at the apartment, I could vaguely remember where his house used to be, in terms of the direction and distance. According to photos, his house was in the style of a tea-ceremony house, but all I could see there was a new apartment building. As I was walking around, thinking “the stone wall and the slope in photos taken back then must’ve been around there,” fragments of memory came back to me: the texture of blue tiles on the wall of the apartment building, the light shining on the large tree at the nearby house, a dog they had at my grandfather’s house. I had an overwhelming sense of nostalgia, but I only remember the images that couldn’t materialize. I guess that is normal because I was only 3 years old.

The area from Hatsudai to Yoyogi is downhill and you can see slopes and stairs in the residential area. Our old apartment building is in that area and the passage to the entrance was stairs. The steps are designed for adults and rather steep for a young child. Since I have no recollection of going up and down the stairs, perhaps my parents carried me. I heard there was a newly opened 7-Eleven and my mother had me run errands, only to see how I could handle it. The store was long gone.

I don't know how old I was, but I remember I was in a walker and ate a strawberry and was shocked by how sour it was. When I try to recall my earliest memory, this is what always comes up. I didn’t know the word “sour,” I presume. It was a reaction prior to language and it was my first experience of something sour. However, it could be that I reconstructed this memory based on a photo, because there is actually a photo of me in a walker. I do like strawberries the best even now, though. I’m not sure how much of my current memory is my own, and how much of it is reconstruction based on stories from my parents and grandparents. Maybe I ingrained their stories and photos into my brain as my own memory.

1-4――The Way Memories Are Created

My idea of photographs is that they are simple reproductions of the world, which reminds the viewer of their other memories, connects memory fragments and fixates them. I still use film cameras. After developing film, I print all the frames onto a sheet (called a contact print) and print the ones I like into 8×10-inch photos. During this process, I look at my photos many times, which gives me a sense that my memories are reorganized, and that one journey splits into multiple branches. The process of reproduction and fixation of memory often makes some memory fragments more realistic, and a memory like “a walker and a strawberry” was created that way. These days, people can save a huge amount of photographic and movie data, yet, I hear, they don't really look at most of it. Maybe the way memory is formed has changed.

1-5――Journey and Its Distance

If you consider a journey as stepping into the unknown, what matters is not physical distance, but something more psychological. I think it is important to accept coincidences when I'm on the road. In other words, never reject anything that happens to come to you. For example, even when my original destination is site A, if I am told there is something interesting at site B or that site C might be better, I tend to go check out these places. I don't always have to go to site A. It is most interesting to take photos of what I happen to encounter: people I come across or a sight I happen to find when I get lost. This trip to Hatsudai, as short as it was, is a small journey for me.