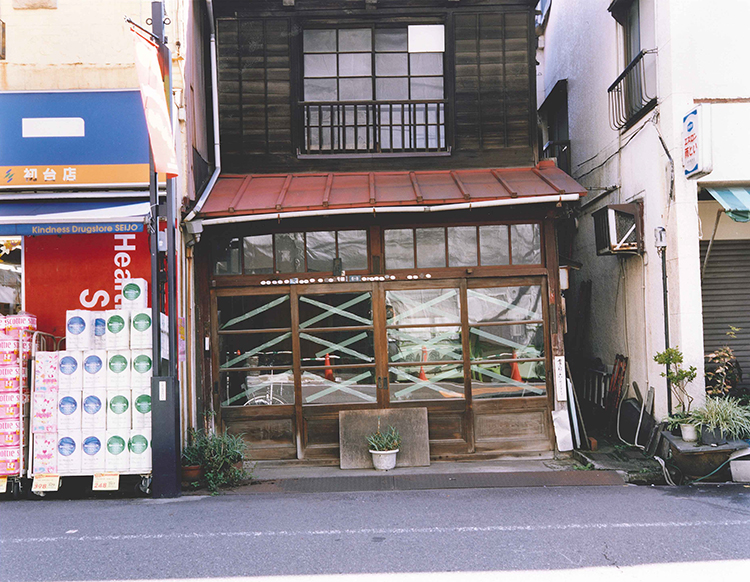 Naoki Ishikawa walks around and takes pictures in Hatsudai, where he spent the first 3 years of his life, for the first time in decades. Hatsudai is at the edge of the Musashino Plateau about 1 kilometer west of Shinjuku. At the west exit of Hatsudai Station is the New National Theater and the other side of the station is a quiet residential area, where Naoki Isikawa spent his first 3 years since birth. After visiting the apartment building he used to live in, he walks to commercial avenues that preserve the atmosphere from that time. Here is his travel through his memories.

After visiting the apartment building where I lived until I was three, I’m walking toward the Hatsudai station.
When I came out of a narrow street in the residential area, I saw banners that say “Association of Hatsudai Business Promotion” hanging off light poles.
My parents shopped here, while my grandmother would go all the way to Tokyu Department Store in Shibuya and Kinokuniya Department Store in Aoyama for groceries. From what I heard, my grandfather frequently ate sukiyaki for dinner and I ate that when I visited them. I barely remember all this, but my tongue might remember it because sukiyaki is my favorite.

I kept on taking photos of various scenes my body responds to. Even if asked what I was taking, I can’t really explain. It was not that I chose older parts of the town. I can only say that my body responded to something even before I can describe it in words.
When it is raining, I take things in the rain. When it is cloudy, I take cloudy scenes. I don’t have fixed images of what I should be taking, by, say, waiting until it gets sunny. I sometimes quote Somerset Maugham’s words, “I write, ‘It rained’ if it rained.” I don’t write something like “it is raining as if the world is going to end” or “it is raining sadly.” To me, rain is rain. Any lyrical modification you add to rain is subjective. I don’t want to distort the world with my words. I believe photos with no subjective consciousness of photographers, such as those in encyclopedias, are more powerful.

The simple reason why I use film is that I lack sufficient skills in dealing with digital data. Film gives me better results. However, I don’t really have a strong desire to stick with film. If I can somehow get results that I like, I don’t mind going digital.
When I go on a trip, I bring film with me because it is hard to get. I have to admit that using film is not convenient because it is bulky and I can only take a limited number of photos. However, the inconvenience of them has its own advantages. For example, when I have only three film packs left and happen to find a great place to photograph, I get this intense focus like “I have to take a great photo with only three remaining film packs.” It’s really an advantage of film that you don’t get many chances.

On this occasion, I wanted to see my grandfather’s house if I could, and I kind of felt lonely to see that it’s gone, but I don’t feel too sad about it. When something is lost, something new is born. That is the way the world revolves. The only thing a photographer can do is to gaze at the reality that moves past your eyes one moment after another. Nothing is born out of nostalgia.
When the apartment building with blue tiles is gone at some point, I will feel a bit lonely. I’m okay because I have documented it in photos. My memory might fade in time, but documentation supports memory.

2-5――I want to keep getting surprised.

I want to accept what is disappearing as surprise, instead of longing for it. One of the purposes of my trips is to “see something new and be surprised.” Going on a trip is the most effective way for me to keep getting surprised. Tokyo is the place I was born and have grown up, meaning it is a familiar place to me and there aren’t many things that surprise me. However, I walked around Tokyo with a camera this time and realized that I was wrong. I found so many surprises in places that seemed familiar to me. I want to find more surprises in Tokyo and keep taking pictures as long as I can.